3 Midnight Madness in Miami: How L'Automobile Show Gets Made

5 Forza Horizon 5 Series 1 Update Goes Live, Take a Look at the Cars You Can Unlock
Car video reviews:
Up Next

Modernized DMC DeLorean Rendering Brings It Back to the Future

Scandalous would be the best way to describe the DeLorean Motor Company, whereas the DeLorean is rightfully considered a flawed icon. The first example rolled off the assembly line in 1981, and production came to a grinding halt in 1982 with fewer than 9,000 cars made.
19 photos

Why is the DMC DeLorean underwhelming, one might ask? For starters, John DeLorean’s management left much to be desired. Charged twice in the 1980s, the gentleman who founded the DeLorean Motor Company was instrumental in picking the PRV engine for the poster-worthy automobile.

PRV stands for Peugeot, Renault, and Volvo. The 2.85-liter engine isn’t bad per se considering how many cars used it over the years, but nevertheless, it’s disappointingly underpowered at 130 ponies and 153 pound-feet (207 Nm) of torque. The Corvette, by comparison, cranked out 190 horsepower and 280 pound-feet (380 Nm) for the 1981 model year from its 350ci V8.

In sharp contrast to the gull-wing doors and stainless-steel body panels, the DeLorean has a reputation for bad handling, poor build quality, electronic issues, and mechanical gremlins. On the upside, Giorgetto Giugiaro made the DeLorean desirable thanks to bite-the-back-of-your-hand beautiful design.

Had it not been for screenwriter Bob Gale, the hero car in Back to the Future would have been a run-of-the-mill Ford Mustang. Can you imagine Doc Brown hitting 88 miles per hour (142 kilometers per hour) in a Mustang?

I certainly can’t, and neither can Marouane Bembli. The pixel artist better known as The Sketch Monkey had a go at modernizing the DeLorean as he saw fit, LED headlights, and everything. Even though it doesn’t have the same allure as the original, this design study is a “what if” worth sharing.

The DeLorean Motor Company soldiers on in the guise of a Texas-based outfit that originally intended to restart production in 2017. But unfortunately, DMC still hasn’t delivered a single example of the modernized sports car. 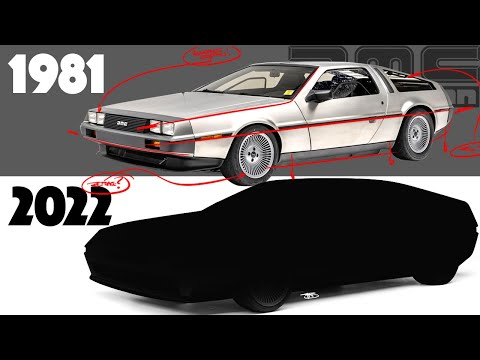