3 2021 Audi A3 Sedan Will Look Sporty, Is Begging for the RS3 Treatment

5 Audi Q5 Next-Gen Rendering Is a Modern Ur-Quattro
Car video reviews:
Up Next

The RS2 is one of the most important German cars of the modern era, at least for the four-ringed brand. Audi probably sells more SUVs than anything else right now. However, the "Avant" or wagon is still their trademark car. The Germans are especially well known for their RS Avants that can simultaneously carry large dogs and drag race sports cars.
4 photos

In the old days, Avants were all about practicality and engineering. Audi wasn't into the large fake grilles and exhaust tips, so the RS2 looks quite simple when compared to its modern descendants, especially the 2021 RS6.

In his latest YouTube rendering video, artist TheSketchMonkey decided to somewhat bridge the 25-year gap between a 1995 Audi proto-RS and today's design language. We can't wait to see how he tackled this one, especially when the RS2 has a strong hint of Porsche in its trimmings.

And you can really tell the artist is emotionally invested with Audi RS, but not just the grandpa model. He talks about having a magical connection with a red RS4 as a kid. The design of these cars has changed a lot over the years, but the boxy shapes of the 1990s are coming back into fashion, so the RS2 can be cool with the right modern touches.

We see this as being similar to the cyberpunk theme, where you get a heavy dose of nostalgia combined with advanced features. For the rendering itself, TheSketchMonkey decided to go with features from the modern RS6, like the wheels, vents and exhaust.

Our favorite feature has to be the wrap-around taillight design, which is only now becoming possible to do with LEDs on mainstream cars. Flush door handles, tinted windows and small panel gaps help transform this 1994 vehicle into a 2021 one. Just don't go trying to make such adjustments to a real RS2 because those things are irreplaceable and quite expensive. 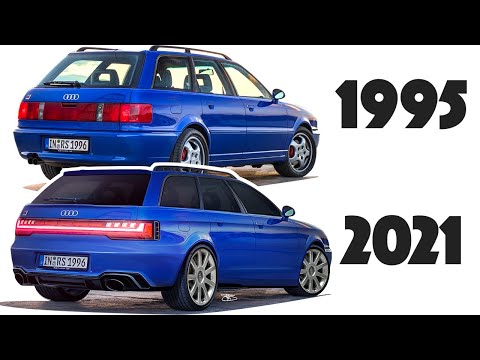