Jamie Foxx Enjoys Father-Daughter Time in Style, on Board a Ferretti Yacht

Convertibles are best enjoyed when the sun is mild and mannered. Now, given that we are dealing with a Prancing Horse here, it might be entirely excusable to use it with the top down all year long.
29 photos

Owning a Ferrari is a surreal experience. Or so they say. Truth be told, it’s like owning every other vehicle when it comes to positive and negative aspects. Minus it can be priced at kidney-selling levels, plus the unbridled enjoyment of being part of the select club of Prancing Horse users.

Anyway, if you want a Ferrari, all the pros and cons have been weighed down and thrown away at the mere sights and sounds of any example. And in case the traditional crimson attire isn’t your Ferrari cup of tea, here is a Lamborghini-like Modena Yellow to bring dreams of early spring all year long.

Grand Rapids, Michigan-based Garage Kept Motors proudly keeps this Prancing Horse in its inventory until the moment is ripe for letting it go into the great unknown – or the new owner’s garage. It comes with the perk of being a California car, hence the apparent lack of surface rust. But it’s not without its flaws, as one can easily see from the gallery shots depicting the wearing-down interior.

They also say that owning a Ferrari is always a love/hate type of relationship. But who are we to wonder? Back on focus, the 1988 Ferrari F355 Spider is best enjoyed with the top down, of course. And with a mere 32,536 miles (52,362 km) on the odometer, despite its more than two decades of life. As for highlights, does anyone need more than Modena Yellow, all-black leather interior plus carbon-fiber trim, and convertible soft top?

If so, then there’s also the 3.5-liter V8 engine located behind the seats to account for. Especially since the mill is hooked up to an exquisite six-speed gated manual transmission. Now, there’s only the small detail of pricing. As such, the dealership is asking exactly $79,900 for this Italian sports car. 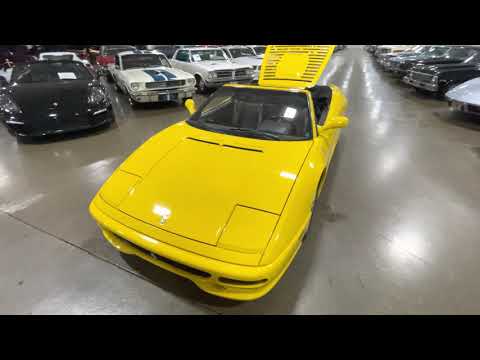