Home > News > U-turn
Vlad Mitrache
It's hard to believe any positive review of the Model 3 coming from a bunch of self-declared Tesla fans and owners. We all know how defensive they get whenever somebody says something less than superlative about their favorite EV maker, don't we?
1 photo
They're like the vegans of the car industry, always ready to talk to you about the church of Elon and how joining it would make your life better, not to mention save the world. And, just like vegans, they do have some pretty solid arguments, but most people just aren't ready to hear them yet.

However, what makes this test somewhat more believable is that it's conducted against another Tesla vehicle. The benchmark chosen by the gathering of Tesla fans was a Model X electric SUV, the most expensive product of the Palo Alto company available on the market at the moment.

One of the things that contributes to its very high price, though not decisively, is its air suspension. Anyone who has ever ridden in a car that uses this type of dampening will know that there is no better substitute for ironing out the minor bumps in the road surface. But even though it also allows driver customization, pneumatic shocks aren't ideal for a sportier handling.

The Model 3, on the other hand, was built to meet the $35,000 base price, so it needs to make do with the traditional coil shocks. The more basic solution means it's cheaper to build and cheaper to maintain, but it also takes its toll on the quality of the ride.

Or does it? Every review so far, regardless of the affiliations of the person doing it, has included at least a passing favorable mention of the way the Model 3 handles. Some have gone as far as calling it better than that of a BMW M3, but we'll go for the average here and say it's very good. That means Tesla must have done something right with its suspension system.

To test it, the guys took the two electric vehicles to a road with a deep and rather short dip in its surface. The plan? To go as fast as it was necessary to give the cars some air time. It turns out they both needed the same speed for the same minimum take off (around 80 mph or 130 km/h), but the result was somewhat more surprising.

According to the two men riding inside the cars, the cheaper, simpler and less fussy Model 3 handled the jump better. While this might be down more to their weight rather than the quality of each suspension system, it's still a big plus for the newer sedan. See them in action below and hear what they had to say after the stunt. 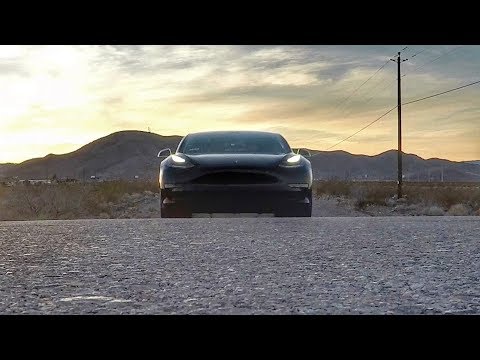