1 9.8-Liter 800-HP Chevrolet Nova Is a Drag Racing Car Washed Up on the Street

Modded 1969 Chevy Nova Murders Everything at the Drag Strip With 7.43-Second Run

During last week’s Midwest Drags event, a whole bunch of self-sustained vehicles showed up to promote what they can do in a straight line. The vehicles must be driven to the track under their own power and can only bring a trailer they can tow themselves to qualify. In other words, no freebies, you can’t bring your car on a trailer.
12 photos

Even though the Nova isn’t one of Chevy’s most iconic nameplates, post-1968 SS models where the "Super Sport" was transformed from a trim option into a performance package are still very popular. The Nova SS is one of the smallest muscle cars to ever come out of Detroit, and you could get an optional big-block V8 with as much as 375 hp and 415 lb-ft (563 Nm) of torque.

Now, that’s pretty cool, even by today’s standards. But if you’re planning on doing a so-called drag strip “takeover,” you’re going to need a lot more than a stock late 60s Nova, regardless of specification.

Enter the Cowboy Up Nova, a 1969 example that’s been heavily modified in order to run laps around the competition—figuratively speaking. In short, it features a Dart 427 LS motor and a Pro Mod 94 Turbo setup, but realistically speaking, it probably runs so many mods in total that it would simply take way too much screen real estate to list them all.

The modded Chevy put together several runs, most of them against some very dangerous competition, by the looks of it. Even so, it couldn’t be matched over a quarter-mile. 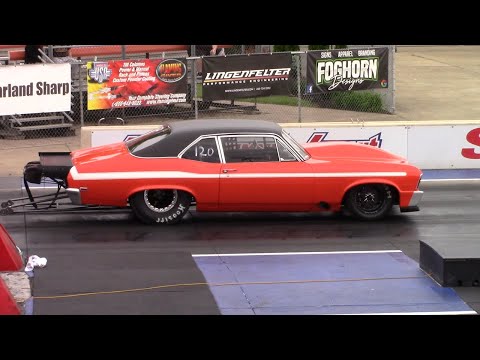