As you’re well aware, the MKV Supra isn’t a proper Toyota. The Japanese automaker collaborated with BMW for the fifth-generation model, which features a Bavarian platform and engine. Even the automatic transmission is produced by ZF Friedrichshafen, which begs an obvious question. Why?
6 photos

Why couldn’t high-ranking executives and bean counters make a case for Toyota-developed underpinnings and oily bits? You only need to look at how badly sports cars are selling nowadays to understand their reasoning.

Although it’s not going to be remembered as the legend the MKIV is, the MKV shouldn’t be discredited. According to Supra program assistant chief engineer Masayuki Kai, the Japanese and German development teams went their separate ways in 2014 right after the hard points of the Supra and Z4 were agreed upon. It’s an extremely different approach from the Toyobaru 86 and BRZ, which is why the MKV Supra feels tauter and more involving.

The most capable specification available today is the 3.0-liter option with 382 horsepower and 368 pound-feet (499 Nm) of torque, figures that are mirrored by the M40i for the U.S. market. Be that as it may, can the Supra hold its own against an M4 with the more potent version of the B58 powerplant?

Yes, of course it can! The M4 in the featured video is a manual-equipped model, which means that it doesn’t upshift as fast as the 8HP under hard acceleration. The base spec also happens to be heavy at 3,830 pounds (1,737 kilograms) compared to 3,304 pounds (1,499 kilograms) for the Supra.

Be that as it may, the Bimmer has the upper hand in the suck-squeeze-bang-blow department. Its S58 straight-six engine is officially rated at 473 horsepower and 406 pound-feet (550 Nm) of torque whereas Competition models level up to 503 ponies and 479 pound-feet (650 Nm).

From a dig and from a roll, the M4 simply doesn’t have the legs to catch up to the Supra over the quarter-mile. But as far as driver enjoyment is concerned, the Supra’s auto simply doesn’t match the BMW’s stick shift. 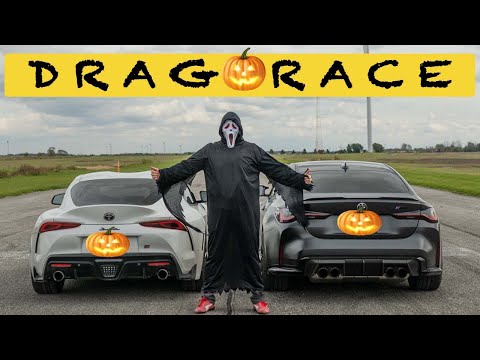