2 GM Design Teases a Sporty CUV, People Be Like ‘EV Chevrolet Camaro, Is That You?’

3 Drive Like a Mobster in Tony Soprano's Cadillac Escalade ESV

5 Jay Leno Is Impressed by 2023 Cadillac Lyriq, Loves It for What It Is, a Luxury Car
Coverstory

Alexandru Boghiu
The 2023 Cadillac Lyriq entered the EV scene with a bang, with prospects ending up on a waitlist because of too many pre-orders. The car has already gathered positive reviews from automotive “heavyweights” like Jay Leno. And since new vehicles these days arrive jam-packed with technology, it’s only fair for tech reviewers to give their take. Here’s what Marques Brownlee has to say about it.
6 photos

From the get-go, Marques thinks the Lyriq “does pretty much everything a Tesla Model Y does, but in more comfort, and it’s just a better car.” Plus, the price is just about the same for the two vehicles, at around the $60,000-something mark.

A full charge will get you an EPA-estimated 312 miles (502 km) of range, and given that its infotainment system is based on Android Automotive, it features built-in Google Maps, which will estimate your battery level and route you through charging locations while driving around, that's probably enough.

The seats are super comfortable and also have a not-so-common massage feature, at least those on the front side of the car. There’s a lot of storage space, and the center console even has a special spot that acts as a wireless phone charger.

As for the touchscreen display to the right of the steering wheel, it has “the best non-Tesla EV software that I’ve ever used,” says the YouTuber, describing it as quick, responsive, and intuitive.

Moving to the backseat, if you’re concerned about legroom, you don’t need to be – there’s plenty of it, even if you’re 6’3” (190.5 cm), like Marques. Plus, the full-glass roof offers a ton of visibility, adding to that spacious feeling inside the car. Down below, you get two USB-C ports and a 110-volt outlet, along with a bit of storage space that's probably best fit for mobile phones.

“So, in luxury and comfort, I don’t really think there’s any argument, I think this is head and shoulders above the Ioniq, above a Model Y,” Marques says. As for the car’s daily ability and practicality, “it aces a lot of that too,” he adds.

The Lyriq packs a lot of good stuff overall, but it’s not perfect. You can check out the full review below. 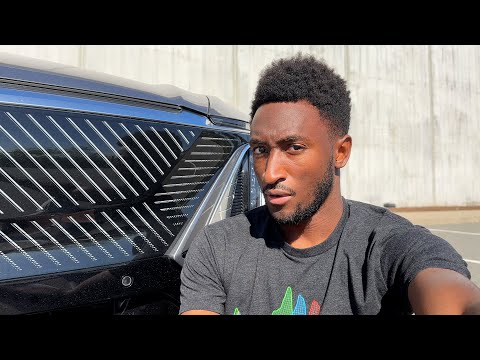