1 When MIT Students Build an Electric Racer, This Is How It Looks Like

Gorgeous Utah Woman Tries to Pass for Her Daughter During Traffic Stop, Fails

With over 100 km of canals, around 90 islands and roughly 1,500 bridges, the city of Amsterdam is a nightmare for city planners. It needs a lot of crazy ideas to keep things and people moving, and its latest project, Roboat, is perhaps the most intriguing of all.
5 photos

Roboat is a project co-developed by the Amsterdam Institute for Advanced Metropolitan Solutions (AMS) and the Massachusetts Institute of Technology (MIT). The goal is to eventually create a transportation solution that would relieve congestion in the city, withouh humans being actively involved.

The project kicked off in 2016 with MIT testing a robotic floating platform that could move forward, backward and sideways on pre-programmed paths in the canals. The technology has since evolved to a more autonomous state, and now fleets of such platforms can latch on to each other to form floating structures.

These structures can be anything from bridges to barges, helping move people across the canals, or cargo and trash downstream.

At the end of August, the team working on Roboats presented at the IEEE International Symposium on Multi-Robot and Multi-Agent Systems a paper on an algorithm that could allow these platforms to rearrange themselves autonomously by detaching from one another, moving to a new location and reassembling in a new configuration.

“We’ve enabled the roboats to now make and break connections with other roboats, with hopes of moving activities on the streets of Amsterdam to the water,” said in a statement according to MIT News professor Daniela Rus.

“A set of boats can come together to form linear shapes as pop-up bridges if we need to send materials or people from one side of a canal to the other. Or, we can create pop-up wider platforms for flower or food markets.”

There’s no official timetable on when a full-scale, functional system could be ready. You can read all about the most recent developments in the Roboat project at this link. 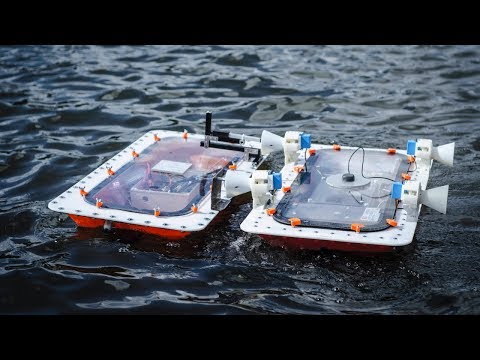