1 Forget About Wheeled Rovers, MIT Is Working on Vehicles That Use the Moon to Levitate

4 MIT’s Self-Driving Boat Is a Futuristic Robotaxi on Water, Ready to Operate in Amsterdam

MIT-Made Tiny Drones Weigh Less Than a Gram, Use Artificial Muscles To Propel Them

Sometimes, good things come in small packages. Extremely tiny packages such as a microrobot that can pollinate fields of crops, help rescue people, and so on. Researchers at MIT (Massachusetts Institute of Technology) are already working on that and they’re making significant progress.
6 photos

Back in spring, MIT announced an insect-sized drone that can move around in cluttered spaces and is very resilient thanks to its soft actuators propelling it. They were made of thin rubber cylinders coated in carbon nanotubes. The actuators could flap around 500 times per second and even if you hit the tiny drone when it was flying, it would still be able to recover. The small aerial robot weighed only 0.6 grams (0.02 oz).

But as MIT explains it, these actuators need high voltages and the tiny, lightweight drones can’t carry the power electronics that would allow them to fly on their own.

Now, scientists have managed to come up with a new fabrication technique that helps them build improved soft actuators that serve as artificial muscles for the tiny aerial robots. They operate with 75 percent lower voltage than the aforementioned ones and can carry 80 percent more payload.

As stated by Kevin Chen, one of the main researchers involved in the project, this breakthrough allows them to put power electronics on the microdrones, proving that soft robots are just as capable as rigid ones, in fact, they even exceed their performance.

MIT’s microrobot weighs less than one-fourth of a penny, is rectangular in shape, and comes with four sets of wings, each driven by a soft, muscle-like actuator. They are made from 20 layers of elastomer, an elastic polymer. A 20-layer actuator needs less than 500 volts to operate and can offer the microrobot enough power to carry items that are three times its weight.

Now scientists hope to reduce the thickness of the 10-micrometer layer to 1 micrometer, which would make the tiny aerial robot versatile and suitable for a variety of applications in agriculture, in rescue missions, inspections, and much more. 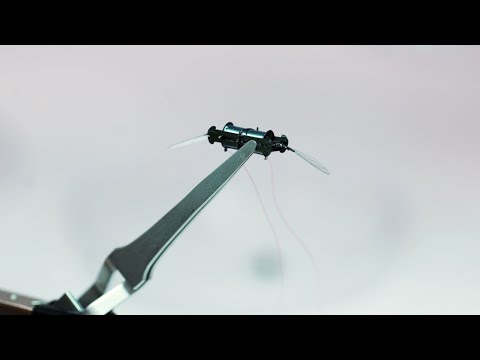