2 Tesla Model S Plaid Races Dodge Demon, All Hell Could Break Loose After This One

Three generations have already passed since BMW introduced the diminutive 1 Series to the world as the rightful heir to the BMW 3 Series Compact. While it is not on sale in the U.S. anymore, it does not mean it did not have its fans.
13 photos

Today the smallest sedan from Bavaria that can be had in America is the 2 Series Gran Coupe, while as far as two-doors are concerned, the range kicks off with the controversial big-grilled 4 Series or the feisty M2 Coupe. But way back in 2008, one could also have a little 135i on the driveway.

And it appears one Lime Rock Grey 2008 BMW 135i certainly made an impression on its owner. So much so that it has become a very cool quarter-mile contender that is not afraid to duke it out with drag racing heroes. Of course, that is the power of the aftermarket world, where even the itsy-bitsy have a chance against factory behemoths.

The good folks over at the Drag Racing and Car Stuff channel on YouTube made sure to showcase the idea with cool, nightly quarter-mile examples. It was all courtesy of a Friday Test and Tune session at the Palm Beach International Raceway in Jupiter, Florida. There, the D.R.A.C.S. team managed to capture a trio of skirmishes performed by the bite-sized 135i against much larger (both literally and figuratively) contenders.

First, the 135i lined up with a crimson Ford Mustang GT, according to the description. The battle proved very tight, with the mighty Blue Oval seemingly having the upper hand, at least initially. In the end, it proved the BMW managed to recoup the initial loss and finished with a satisfactory 12.31s ET against GT’s 12.77s result.

Next up from the 0:55 mark came the hulking Jeep Grand Cherokee Trackhawk. This time around “David” didn’t win against “Goliath,” just to prove the natural order of drag racing is sometimes hard to upset. The SUV narrowly took home the win (11.82 s to an improved 12.01s).

This might have ambitioned the 135i driver to prove both man and machine could do better. So, from the 1:25 mark, we see the BMW take on an Infiniti Q50 and show it might be on par with the Trackhawk if all stars align. The result speaks for itself about the humiliation endured by the Japanese rival: 11.82 s victory (same time as the Jeep) against a 12.76s ET. 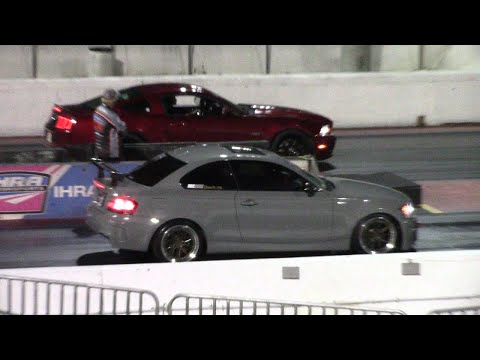