5 art of rally Review (PC): Zen Driving on the Winds of Synthwave
Car video reviews:
Up Next

Home > News > Videogames
27 Aug 2021, 19:08 UTC ·
by Cosmin Vasile
We reviewed art of rally, a zen driving rally experience, last month and we decide that it’s an interesting approach that’s definitely worth a look. We’re now back with a similar game made with a smaller budget – Star Drift Evolution.
8 photos

Developed by Catze Studios, this arcade racing game featuring a low-poly look promises to offer tons of content and you won’t even have to break the bank to buy it. Star Drift Evolution spent some time in Early Access, so the studio refined the driving experience based on the players’ feedback. It’s also one of the main reasons why it has so much content available at launch.

Just like art of rally, Star Drift Evolution is a top-down racer with easy controls and a very simple, clean UI (user interface). However, players can also choose the typical arcade chase view or even customize their own camera and play how they want.

Although wheel support is not natively supported, PC players benefit from full controller support with customizable buttons. Also, many players confirmed their Logitech steering wheels work well with the game. More importantly, Star Drift Evolution features 50 cars at launch and a diverse range of tracks (about 75) to choose from. Each car is suitable for a specific type of track, so you’ll have to pay attention to its stats (top speed, acceleration, grip and downforce).

And since there are so many similarities between art of rally and Star Drift Evolution, let’s add one more. The game has a stellar soundtrack that includes more than 25 retro and synthwave songs from artists like Kenobit, Electroshark, and Luke McQueen II.

We haven’t yet tested Star Drift Evolution but judging by the number of positive reviews on Steam, it looks like this is a really good game. And the best part is that developers have decided to celebrate the launch of their game with a 25% discount, which means that PC players can buy Star Drift Evolution for less than $10. 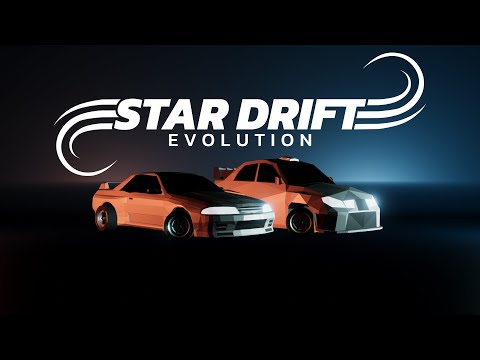