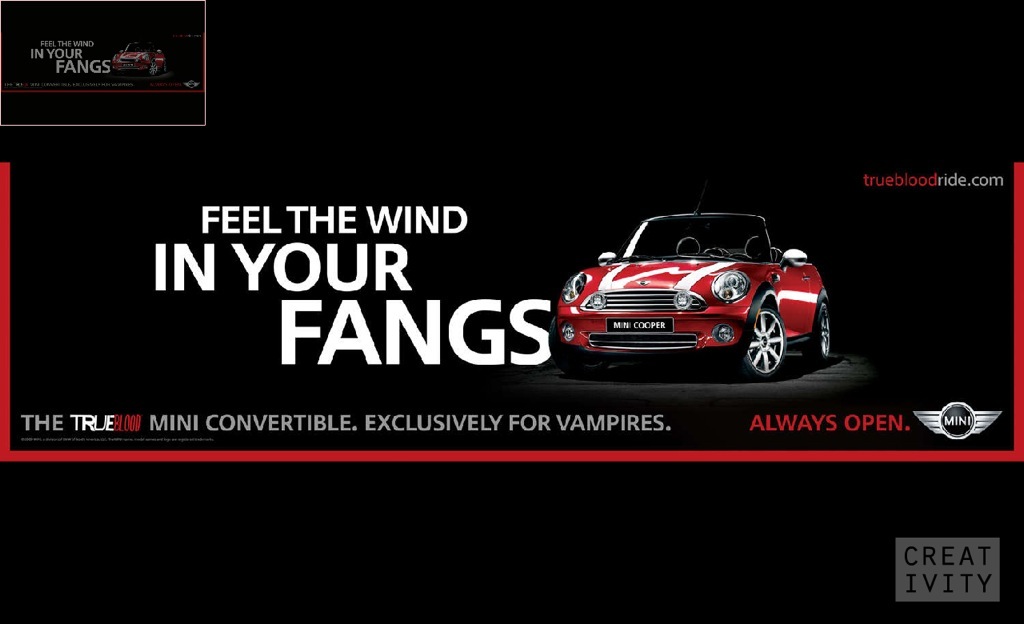 Who’s promoting who? That is the question the launching of the new BMW Mini True Blood campaign raises. MINI USA partnered with TV network HBO, which runs the ‘True Blood’ show, to promote both the MINI brand, and the new season of the show.

Probably the ‘True Blood’ vampire show will have a large audience with the beginning of the new season and this new marketing campaign, but HBO is also doing all the hard work. The TV network is responsible for the most part of the campaign, including creative, media buy, and strategy.

All that MINI has to do is stand still and show its fangs, while featuring all the national prints, online and out-of-home outlets. The print ads will run in US Weekly, AM New York, New York Observer and trade outlets.

As for the online resources, the ads can be seen on Yahoo and AOL portals, as well as on CNN and HBO’s homepage. Several microsites were involved, including www.bloodcopy.com, www.fellowshipofthesun.org, and www.americanvampireleague.com.

Kate Alini, MINI marketing communications manager, didn’t think twice when HBO approached her last month: ”After evaluating it, we thought it interesting, fun, and unique. They came up with the concept and were dead on and authentic with our brand identity. But it was their concept,” she says.

According to MediaPost via bmwblog.com, the campaign highlights the new MINI convertible as the exclusive car of the vampires, while the slogan suggests them to “Feel the Wind in Your Fangs” and “Type GO.” The advertising campaign began to run on Monday, May 25, continues to the second season premiere on June 14, and it will end on June 21.

Other brands involved in the process of promoting the ‘True Blood’ show include Harley-Davidson, Gillette, Monster.com, and Geico.