Mihnea Radu
We're probably witnessing the endgame for the modern small hot hatch, before EVs take over everything. Which means that this John Cooper Works GP needs to be something special.
3 photos

And it is. The latest Nurburgring spy video from Automotive Mike shows the prototype wearing the most extreme modifications we've seen on a production hatchback of this size. It's like the Civic Type R of MINIs.

Being small doesn't necessarily mean it will lack power. Currently, the "normal" JCW offers 231 HP from its 2-liter TwinPower Turbo engine. However, the Clubman and Countryman upgraded to a 306 HP version of that four-cylinder. Will the GT do the same?

We want to say "yes" but the relatively short wheelbase combined with FWD would make the car almost uncontrollable, as likely to result in a mess as a race car driven by amateurs. The JCW GP just wants to make its owner look like a hero, not bring out his flaws.

Why not something in between, say 250-280 HP? Well, launching a new car is not as easy as it used to be. You need lots of paperwork and testing. We haven't seen any JCW GP with emissions-measuring equipment, signaling that the 2-liter it uses can already be found on another car. But as long as the car goes on sale, people will be able to tune it and get all the power they want.

So the new Nurburgring records, which are highly probable, will be set using the magic of downforce and suspension tuning. Despite having a massive wing over the trunk and added ground effects, the JCW GP probably just has neutral lift characteristics. But super-sticky tires and more advanced dampers should cut about a dozen seconds off the lap time.

Availability for this model will be strictly limited, probably two or three thousand units globally. Don't forget that the current generation of the hatch will go out of production in 2020 or 2021, so right after the launch of the GP, you'll see the next-gen prototypes coming out and keeping engineers busy. Prices should start in the region of €40,000. 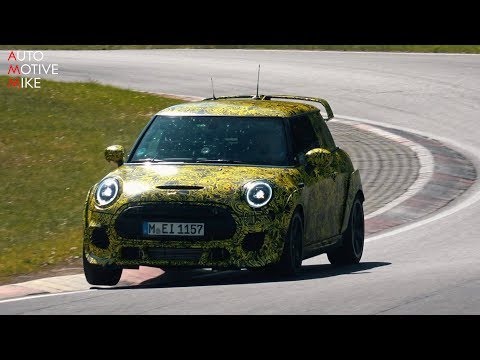