4 The Most Powerful MINI Ever Built Hits the Goodwood Track

5 The 2015 MINI JCW Hardtop Has a Magic Button – Video
Car video reviews:
Up Next

The new MINI JCW will have a hard time trying to prove itself, especially against its only true competitor, the Audi S1. That’s the only hot hatch of similar size with premium fit and finish and yet, in terms of performance, a lot of cars are claiming a bite out of the John Cooper Works hardtop’s territory.
1 photo
Amongst them, you’ll find the Renault Clio RS 220 Trophy, for example, a car similar in size and power figures at a first glance. To be more precise, while the JCW MINI has 231 HP and 320 Nm (236 lb-ft) of torque at its disposal, the Renault makes use of 220 HP and 280 Nm (207 lb-ft) of torque and a six-speed EDC transmission that is supposed to be 50 percent faster than in the standard model.

Then we have the Opel Corsa OPC that comes with a 1.6-liter 4-cylinder turbocharged engine good for 207 HP and 245 Nm (181 lb-ft) of torque. Unfortunately, this model is available only with a 6-speed manual gearbox which takes a toll on the 0-62 mph (100 km/h) sprint.

Speaking of which, the numbers offered by the manufacturers should speak loudly in this regard. MINI claims the John Cooper Works hardtop will accelerate to 100 km/h (62 mph) in 6.1 seconds when using the automatic 6-speed gearbox and 6.3 seconds when hooked up to the manual 6-speed alternative.

The Renault, on the other hand, is quoted at 6.6 seconds flat while the Opel comes in at 6.8 seconds. Therefore, there is a difference in performance implied even by the manufacturers but how big will it be in real life after all?

To be honest, we didn’t expect things to be so far off but, considering that the MINI is indeed using the automatic 6-speed box, it’s only natural for it to come first, even by such a big difference. 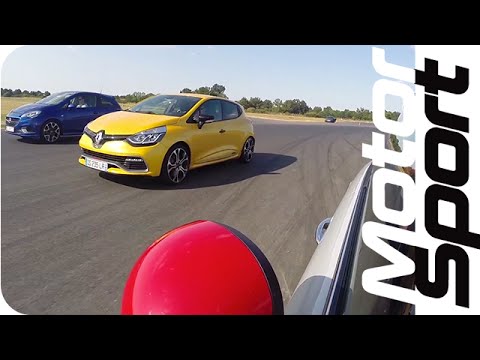