Launched in the fall of 2019, with two years having passed since a monstrous-looking concept car previewed it, the limited-edition MINI John Cooper Works GP has recently started deliveries around the world.
14 photos

One such delivery - in the usual funky way of MINI - happened in Belgium, where famed supercar collector and YouTuber POG wanted to capture the whole thing on camera in a more off-beat manner.

That he did, and then some, as POG also decided to create an impromptu rallycross track around his house and time his ‘laps’ with the ‘world’s quickest FWD car,’ one of just 3,000 units to be made for the whole world.

With some cinematography worthy of a Michael Bay movie, save for explosions, the resulting video is quite entertaining for the viewers and everyone involved in making it. It all was going well until POG subsequently flipped the car over the wrong way up and back again, during a slide that was maybe a bit too optimistic.

Post-crash we can see that after so many laps on the grass, the car had created some small trenches into the soil, which had effectively transformed his yard into a life-size slot car track.

One of the divots formed from the trenches probably had enough with the MINI going round and round and decided to literally take a stand, which is the main reason for the car flipping over – apart from the driver deciding this was a good idea in the first place, of course.

Interestingly enough, the car only had 38 km (24 miles) on the odometer until the crash, with the trip computer showing a hilarious 65.6 l/100 km (3.6 mpg) fuel consumption immediately after.

Despite having a French-language YouTube channel, POG is known around the English-speaking car world for many other feats involving his vehicles, like literally transforming his Lamborghini Aventador into an XBox controller to play Forza.

With only 3,000 MINI JCW GPs ever built, you’d think that the rarity of the model would prove to be a problem during fixing, but Pog recently uploaded some photos on Facebook with the repair process and the car seems to be on the road to recovery.

For those with no patience or need to see a ton of FWD sliding on grass in POG’s yard, the crash happens at around the 9:27 minutes mark. 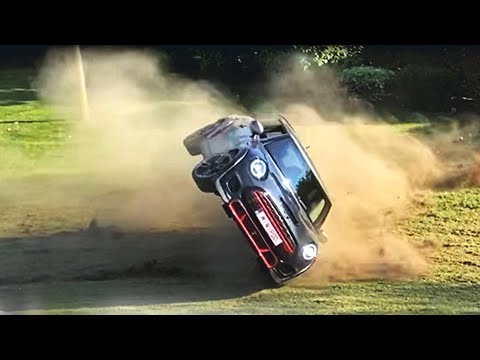