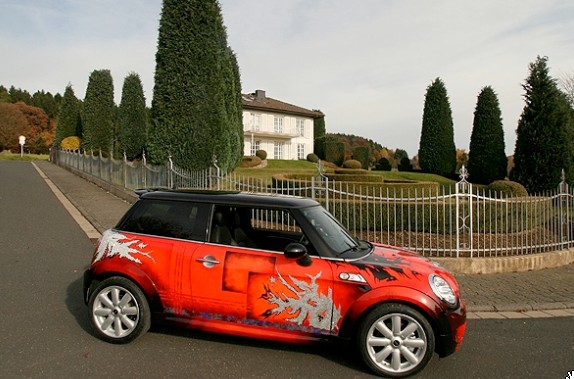 Once again designers eager to exceed themselves in combining art with technique are bringing to the curious public an exquisite car model. A truly sparkling surprise that stays under the signature of artist Marco Mehn is waiting for Mini Cooper fans (and not only).

The masterpiece of the designer, a Mini Cooper S, appears to the curious viewers in a distinctive space-frame style, with up to 20 hand-applied paints, three finishes and no less than 40,000 Swarowski crystals.

The glowing model represents the artist's labour of several months and is thought to be the most expensive Mini in the whole world. As he confesses it was not an easy work to do especially when we are to speak about its unique style. And judging by the photos, it was worth the effort!

However, the talented artist has not improved the car's performance. The glamorous vehicle sprints from 0 to 100 km in 7.1 seconds and reaches a 225 km top speed. The model is to be exhibited at the Heim+Handwerk fair in Munich, on 28th November. Yet, those who really desire to be the first to set their eyes upon the beauty can take a preview at the Luxury Fair, which is to take place in Vienna's Hofburg Palace for three days starting with November 21.

But what was the incentive for Mehn to design such a jewel? A recent survey has shown that Mini drivers are not just particularly sexy but also innovative, hence the need to design this flashy sample.

The artist himself speaks about his masterwork as being “he opportunity to create a work that people not only with the eyes can perceive; driving for many people is emotion and pure luxury, which they feel with all your senses.” The result is a daring vehicle to be tested by eccentric people or curios visitors.