2 McLaren 570S Burns to Crisp After Hitting House, Was Headed to Goodwood

A strange three-car accident happened in Atlanta on Tuesday when a McLaren 570S got airborne after crashing into a Lamborghini Aventador SV Roadster and a BMW i8. Considering the value of the cars involved, insurance companies might look at a million-dollar bill.
7 photos

If you ever drove near a motorsport event, you know how many idiots try to pretend to be race pilots. I’ve seen the most stupid crashes happening around racetracks, even when the cars involved were nothing more than family sedans. I guess something inside us screams, “I can do that all right,” when we see professional drivers doing it. Well, most often than not, we can’t.

This was proved in a recent crash that happened during Atlanta’s Gumball 3000. The cars were not involved with the event as per the missing stickers, but they were probably heading there. As shown in several videos shared on social media, a McLaren 570S collided with a Lamborghini Aventador and a BMW i8 on a public road in Atlanta while they were driving in a formation.

The video shot from inside the BMW i8 shows how McLaren hits the Lambo before becoming airborne and bouncing into the BMW. Another video shows what was happening before the crash. We can see that the 570S switches lanes to overtake a slower Kia Soul. When he goes back to the middle lane, the road appears to narrow from three to two lanes, prompting the Lambo driver to change position and get into the path of the McLaren.

Despite the spectacular crash, police reports acquired by Road & Track confirm that no person suffered injuries, except maybe drivers’ egos. The Aventador driver was cited for making an improper lane change. At the same time, the driver of the McLaren was fined for driving too fast for the conditions. While the blame mostly lies with the Aventador driver, the poor visibility offered by his car could be a good excuse. 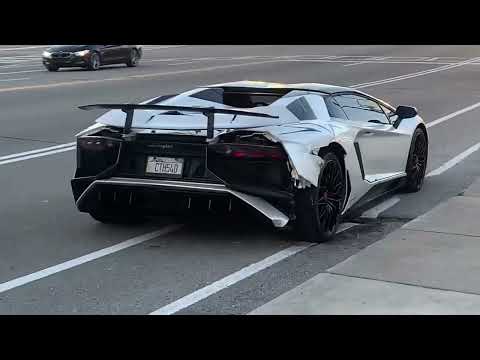