Milla Jovovich Knows What Good Cars Are All About 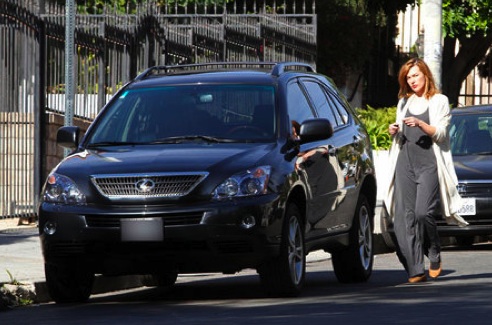 It's always surprising when you finally have the chance to see a celebrity driving a car, mostly because most of them are usually looking for kitschy and glossy rides that could keep them on the front page of the newspapers. Truth is, there are a few names out there who really know what the auto industry is all about (just look at Jay Leno for example), but only one in a hundred probably have an idea of what happens behind the hood of a car.

That's why we were so impressed when we saw Milla Jovovich drive a Lexus RX350, a model that could be very well considered a powerful name in its class.

Although we bet you're not here to read Lexus RX350's technical specifications but to see Milla's silhouette near the car, it's worth mentioning that the car is powered by a 3.5-liter V6 engine that develops 204 horsepower at 6200 rpm and 346 Nm of torque at 4700 rpm.

OK, enough talking, just click on the adjacent picture and enjoy the two bodies in it...