1 Spitfire, the Hailed Hero From the Battle of Britain That Ruled European Skies

2 USAF Flies Over Normandy Once More, This Time With F-15s and Stratotankers

Alfa Romeo Giulia GTAm Becomes Sexier, Can We Call It the Italian BMW M3 CS of Our Dreams?

Launched about eight years ago as a continuation of the iconic IL-2 Sturmovik series, IL-Sturmovik: Battle of Stalingrad received more than two dozen pieces of new content that added a plethora of aircraft, tanks, and other war vehicles and weaponry.

After three years in development, the folks at 1C Games Studios announced the next expansion for the military flight simulator, IL-2 Sturmovik: Battle of Normandy, which is now available on PC (via Steam). Priced at $60 / €60, the new expansion takes players to France, in the skies above the Normandy and Calais regions, before and after the June 6th, 1944, Allied Invasion.

The focus of the expansion is the aerial battles between the US Army Air Force, Royal Air Force, and the Luftwaffe. IL-2 Sturmovik: Battle of Normandy brings eight new iconic aircraft to the series, which can be taken into virtual combat alone or with friends. Additionally, the expansion comes with a map of the Normandy theater that includes small chunks of southern England and northwest France.

More importantly, the map has been designed using satellite data to accurately reproduce topography that reflects the battleground as it was in mid-1944, both pre and post-invasion. Naturally, new missions and airfield types are included in the expansion, too, bringing the total amount to 100 airfields with historically accurate layouts.

On top of that, the Battle of Normandy adds new ships, ground vehicles, buildings, coastal defenses, V-1 buzzbombs, and their launch positions, as well as dozens of new aircraft paint schemes. To sum it all up, here are the 10 player-controllable aircraft (8 in the Standard Edition) included in the Battle of Normandy:


The Premium Edition of IL-2 Sturmovik: Battle of Normandy is available for purchase for $90, but with the current sale, players can get it for just $80. The Standard Edition is on sale too, so for a limited time, it can be had for $50 / €50.

It’s important to mention that if you buy the Battle of Normandy from Steam, you’ll need to buy the base game, too, in order to be able to play it. Luckily, IL-2 Sturmovik: The Battle of Stalingrad is 85% off right now, so those who don’t own it yet can purchase it for just $7.5 / €7,5.

Those who’d rather buy IL-2 Sturmovik: The Battle of Normandy from the game’s official online store won’t need the base game, but they will not receive a key since they will receive a non-Steam version of the game.

However, even though the Battle of Normandy can be played as a separate standalone expansion, it can also be integrated with other Great Battle titles such as Battle of Stalingrad, Battle of Moscow, Battle of Kuban, or Battle of Bodenplatte. It’s even possible to combine all these expansions to create a huge World War II air-combat sim with both Eastern and Western Fronts available to explore. 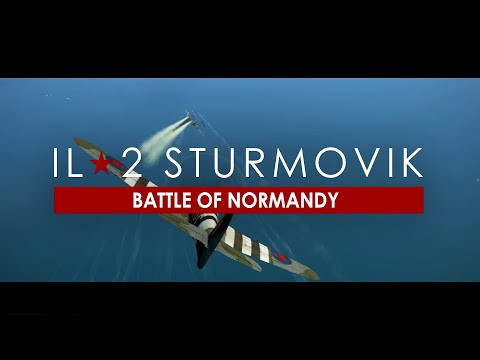