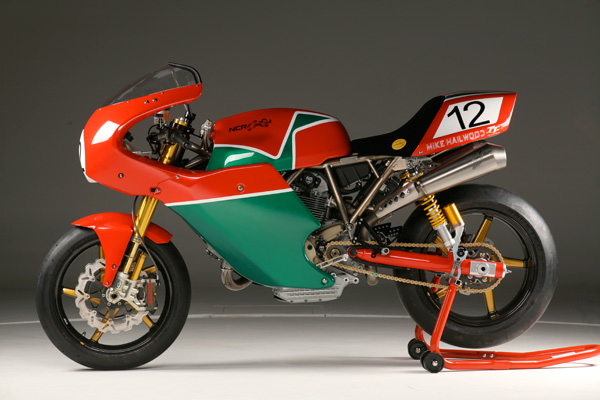 In this great world we live in there are 2 kinds of motorcycles: those for regular people, the kind that you do your daily commuting in and the extremely expensive kinds of bikes, the kind that only ridiculously wealthy people ride around on a Sunday on the Riviera.

NCR is a maker of such exclusive bikes and word has grabbed our “motoring ear” that they plan to come out with a limited edition Mike Hailwood TT replica bike. For those of you who don't know who that is, Mike Hailwood was a very successful Moto GP racer, who incidentally happens to be considered one of the greatest of all time.

To honor that legacy, NCR have come up with a replica of his Ducati 900 which helped him secure his Isle of Man title 30 years ago. Though by today's standards the bike looks extremely simple, it's still a mean machine that can take to speeds that can raise your pulse to dangerous limits.

Titanium is the word of the day when it comes to this bike, and lavishly splattered all over the bike, starting with the frame which weighs in at a ridiculously light 11 pounds, continuing with the exhaust and ending with the engine billet connecting rods and valves.

The rest of the body is made out of carbon that even extends all the way down to the wheels. Now take that light weight and compare it with the 1120 cc Ducati V-Twin engine that puts out 130 horsepower and has 98 foot-pounds of torque at 7000 rpm.

The limited edition title means that the bike will only be made in just 12 models. That would explain the price tag on this baby, $130,000, which means you won't go commuting for sure in it.