Now, though, it feels as though drag racing is the second most popular topic on the Internet after cats. There are numerous YouTube channels that produce high-quality videos featuring two or more cars accelerating side by side, and it seems like the world can't have enough of them. Considering how everyone is after the quickest possible gratification these days, their success is totally understandable: a drag race is an intense shot of adrenaline that only takes a few seconds, but gives us plenty to talk about for minutes, if not hours.

Back to the Hilux, the Japanese pickup received its nickname thanks to its legendary reliability and robustness. To be fair, that hasn't changed too much so, in that sense, you could call the Hilux "invincible". However, do it at your own risk: when the "invincible" pickup only comes third (after finishing fourth in the first race) in a six-way drag race, you might end up with some egg on your face.

The game was rigged, though. The Hilux - or any other pickup from that lineup, for that matter - stood no chance against the mighty (and somewhat cheating) Amarok. The Volkswagen truck is the only one to feature a six-cylinder engine, giving it a huge advantage over the rest of the pack only using four-cylinder units.

How much of an advantage? The 3.0-liter V6 turbodiesel in the German contender makes 255 hp and 428 lb-ft (580 Nm) torque. By comparison, the closest of the other five is the Ford Ranger with its 2.0-liter EcoBlue bi-turbodiesel producing 210 hp and 370 lb-ft (500 Nm) of torque, with the Hilux itself following closely thanks to its pretty big 2.8-liter four-cylinder turbodiesel making 201 hp and the same amount of torque as the Ranger.

We've only gone through half of the contenders from the most powerful to the weakest, and we're already dropping below 200 hp - this race is definitely going to be on the slow side. Two of the remaining models - the Nissan Navara and the Mazda BT-50 - share the same output despite not being built on the same platform or having the same engine. The Nissan gets a 2.5-liter four-cylinder whereas the Mazda (now built on the same platform as the Isuzu D-Max after years of sharing its underpinnings with the Ford Ranger) has a 3.0-liter four-banger, both making 187 hp and 332 lb-ft (450 Nm) of torque.

Finally, we have the least powerful contender: the GWM P-Series. The what? The P-Series is a pickup truck built by the Chinese company Great Wall under its Haval branch. It's sold in the Australian and South African markets, among others, under the GWM name (P-Series in the latter, or simply "Ute" in the former). It has a 2.0-liter turbodiesel engine producing a mere 161 hp and 295 lb-ft (400 Nm) of torque, which places it comfortably last.

We can all agree the Amarok is only there to collect the prize. It's like you and I planning a 100-meter dash, and Usain Bolt tagging along. Yes, he will win (even if we tie his legs together, probably), but that doesn't mean we can't ignore him and go about our business as if he weren't there. That's precisely how you should look at this race: five contenders, all fighting for the "best four-cylinder mid-sized pickup truck" title. 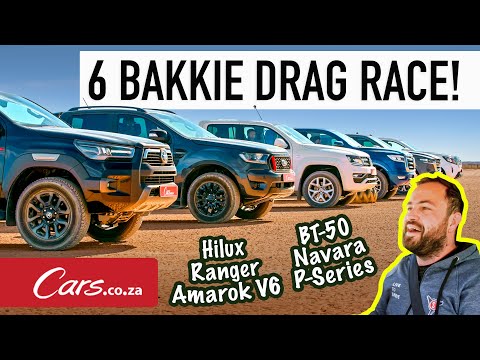