2 Meet Stewart, the Innovative Device that Should Mediate Trust Between Man & Machine

3 Is This Uber’s Self-Driving Car? First Spotting Says So

4 Google's Self-Driving Car Gets the Green Light, Will Hit Public Roads This Summer

Elvis Presley’s Fabulous ‘62 Lockheed Jet Is for Sale, 3 Decades After It Was Abandoned

A total of $10 million has been invested in a 32-acre (129.499-square meter) facility located in Ann Arbor, Michigan, and there’s a lot more to it than we think. Considered to be the world’s first controlled environment specially designed to test the potential of connected and automated vehicle technologies, we'll think of it as Frankenstein’s lab. Instead of resurrecting a creature with electricity, however, this lab will create the auto-freak of the future. OK, maybe we’re playing the conservatism card a bit too much here, but you have to admit, the idea of simulating the same atmosphere of an actual metropolis just to test self-driving car technology is scary. There’s more than just the uniqueness of it that made us curious, and it has something to do with the companies that also invested serious money in the city’s development. The University of Michigan opened Mcity on Monday, but the project has been an ongoing investment for quite a while now. It was designed and developed by U-M’s interdisciplinary MTC, in partnership with the Michigan Department of Transportation (MDOT). The facility is a simulated urban and suburban environment that includes a network of roads with intersections, traffic signs and signals, streetlights, building facades, sidewalks and construction obstacles. To keep things as accurate as possible, they even had some specifics integrated, such as road signs defaced by graffiti and faded lane markings. According to the University, it is designed to support rigorous, repeatable testing of new technologies before they are tried out on public streets and highways. Later than Google's self-driving car, but not too late
1 photo
Here’s what Peter Sweatman, director of the U-M Mobility Transformation Center, has to say about the contraption: “There are many challenges ahead as automated vehicles are increasingly deployed on real roadways. Mcity is a safe, controlled, and realistic environment where we are going to figure out how the incredible potential of connected and automated vehicles can be realized quickly, efficiently and safely."

The project may look like it’s missed a couple of years of development, especially if you’re comparing it with Google’s trials currently ongoing on public roads. But it didn’t stop big automakers to invest some serious cash themselves. Among the “Current Leadership Circle companies” we’ll mention Ford, General Motors, Honda and Nissan. 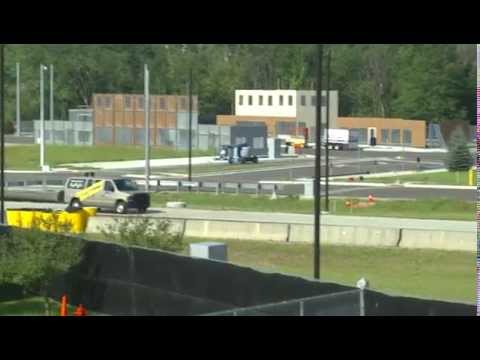