3 Your Guide To Tires: What Kind Should You Get For Your Car

4 Michelin Pilot Sport 4 S Tires Will Be Used By the Likes of Ferrari and Porsche
Car video reviews:
Up Next

If you haven’t heard about Michelin's Acorus Technology and Maxion, and what it means for your tires, you might want to finish this article.

Michelin Tires and Maxion Wheels Bring Us a Flexible Wheel

Not so long ago, Michelin started listening to its customers ion a peculiar matter and sought to find solutions to minimize or even eliminate tire damage. Working together with Maxion Wheels, the teams were able to put together a pretty neat piece of tech for your car.

What you’ll see in the video at the bottom may not be a big deal for you, but when you realize how much money is spent yearly by Americans on new tires and wheels due to rim damage, you might start changing your mind, probably even look to buy a set.

We all know who Michelin is. They’ve been around since the first days of the modern car wheel, 130 years and counting actually. They’ve seen tire damage you wouldn’t believe. Have done tests you wouldn’t believe, and are at the fore-front of tire research and production, always looking to offer better solutions and bringing us constant new tech such as Acorus and even Uptis in the future years.

Maxion Wheels on the other hand, are the other half of this story. They have been manufacturing steel and aluminum wheels with applications on cars, agricultural equipment, commercial vehicles, and even military-grade ware for over 100 years too.

So it make sense that such a team-up of two industry leaders would produce such a wonderful idea design and application. Now, enough introductions. Let’s get to business.

Most wheel damage and blow-outs happen when hitting an edge such as a curb or a pothole at a speed too great for the tire system to sustain. Usually the tire is pressed between that edge and the rim of the wheel, acting like a scissor upon the area and in most cases even damaging the rim and wheel as well.

Acorus on the other hand, solves this. The first step in stopping this sort of damage resulted in a wheel that is made from two parts. The first part is similar to that of a classic wheel, rigid to offer the support needed for your car and tire to function. However, part two is where it gets fun. On the interior and exterior of the wheel well, sit two flexible flanges that keep the tire from any direct contact with the rim or rigid part of the wheel.

When hitting a pot hole, the tire pressure forces these flanges upward into the rim rather that the tire itself. Thus it protects the tire from and shredding and keeping the rim safe as well. It does this by basically creating a wrap-around effect against the rim rather than pushing directly into it.

This method of protection has an added bonus too. Because the tire now flexes around the rim, the pressure is no longer distributed wholly onto the suspension system, giving the passengers a smoother ride as well. It’s basically like having an extra suspension system on your vehicle.

This tire system is also available for a large range of vehicles, from your usual sedans, vans and pickups, to buses. Oh, and there is no need to but some special tire when using the Acorus. It can be used on any tire that is big enough to encompass the system. 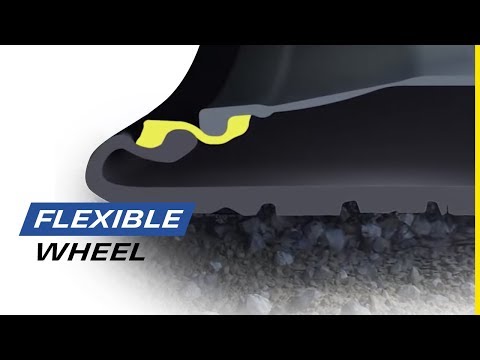