Mercedes S-Class vs. Audi A8 vs. BMW 7 Series Is a Battle of Technology

Large German executive cars used to be the pinnacle of the automotive industry. Interest in SUVs has changed that, but there's still fierce competition between the BMW 7 Series, Mercedes S-Class, and Audi A8.
3 photos

Once every couple of years, a video like this pops up and lets us see which direction the industry is changing. Since the last time we've looked at these three, Audi launched a brand new A8, which moved the game in the interior department.

Rather than just cars, we see these three as lists of technologies their respective automakers can offer at the moment. As a status symbol, the Mercedes S-Class is still the best at showing the world you're doing well.

It's much older than the A8, but a mid-life refresh recently updated what was a decent design and added fresh six-cylinder engines. The 7 Series will get its facelift next year, but will always be the sportiest in the segment. Meanwhile, Audi's design is disappointingly understated.

The tech-fest continues inside, where the S-Class showcases its panoramic dashboard. The 7er seems old fashioned with its small iDrive screen and less configurable digital dash, but some customers prefer that. Meanwhile, this review places the Audi A8 at the top regarding interior style.

That's not the end of the story, though, because all of them feature even more stuff in the back seats. The stuff those expensive entertainment screens can do boggles the mind. The long wheelbase versions are ideal for transporting heads of state, but there's sufficient legroom in the standard model as well.

So what are they like to drive? Well, Mat from Carwow says the S-Class has better steering feel and is more fun than the 7 Series. The A8 is the surprise of this test, as its air suspension is even better at isolating you from the road than the Mercedes, plus quattro offered as standard gives reassuring grip. 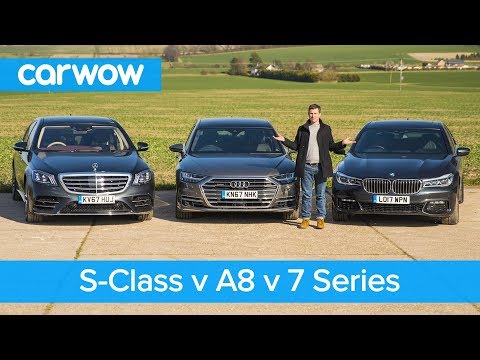