5 This Is How an Ex F1 Driver Feels About the New Mercedes EQS
Car video reviews:
Up Next

Mercedes S-Class Drag Races the EQS EV, Someone Should've Thrown In the Towel

Unless you’ve been living under a rock these past few years, you know that Mercedes-Benz has a selection of electric vehicles out. One of them is called the EQS, and it’s the zero-emission alternative to the S-Class, but can it actually beat its ICE-powered flagship sibling?
9 photos

The answer comes from CarWow, who pinned the two models against each other, in a series of tests. From a standing start, it’s more than obvious which one was quicker, because you could park several buses in the gap. From a rolling start, however, it was a completely different result, as you are about to see.

Now, as far as the specs are concerned, the Mercedes-Benz EQS came in the 450+ specification, meaning a single electric motor powering the rear wheels. Fed by a 108 kWh battery that enables a 350-mile (563-km) range when it's fully juiced up, it generates 330 horsepower and almost 420 lb-ft (570 Nm) of torque. The automaker claims less than 6 seconds are required to hit the 60 mph (97 kph) mark from a standstill, and a 130 mph (210 kph) top speed.

Despite having more horses than the EQS, it’s the instant thrust of the latter that should, in theory, help it launch quicker. But is that really the case, or does the ICE still have a lot of life left in it? You’re only a mouse-click away from finding out. 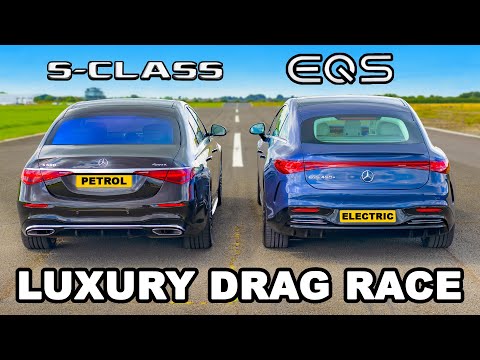