America is treating cars like consumer goods. Gone are the times when people worked on their engines over the weekend or did minor repairs.
3 photos

The byproduct of this is a huge supply of write-offs and cheap used models, which are sometimes shipped to other countries. "Russian mechanic" Arthur Tusik has made a business of fixing wrecks, almost all of which come from American auctions.

Its badge makes it desirable in Eastern Europe, where German SUVs are seen as a sign of wealth. So wrecks are often salvaged and put back on the road by people who are willing to take a risk.

At first glance, the condition of this GLC is pretty bad. After a shunt, its front end looks like it's been in a bar fight, metal and plastic being mangled together. Yet Arthur was able to fix it relatively easily.

After stripping the front, he decided that the bumper, headlights, and hood were beyond saving. Mercedes used a lot of aluminum, so panels need to be heated and beaten back into shape, including the "new" hood, which arrived from a junkyard with a small dent.

The only structural work involves pulling the right chassis rail. This is probably why the GLC was a write-off in the first place. In America, fixing this would have meant stripping the whole front and welding a new rail into place. Based on the condition of the brake rotors, the GLC is almost new, so whoever bought this will put up with these kinds of repairs knowing he's got a luxury SUV for a fraction of the cost.

Also, he ordered new radiator support and bumper beam. Most of the time, his repairs are way more complex and involve cutting into the chassis. But both bits just bolt back into the GLC. An added benefit to these repairs is that the new headlights are the correct European spec. 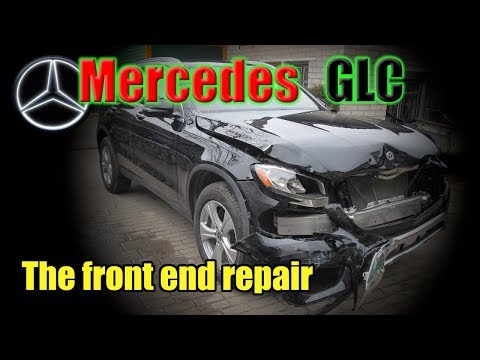