1 Electric G-class Could Be Revealed As Early As September

4 Mercedes G-Class Going Electric, EQG Reportedly Due at the IAA Munich This Fall

Yes, the rumors were true, and Mercedes-Benz has officially introduced a fully electric G-Class, but it’s not what everyone thought it was going to be.
6 photos

Just like its name so casually hints, the Mercedes-Benz Concept EQG is not a production model, but a prototype. Mercedes mentioned that the electric off-roader will be ready to buy sometime in 2024, with some of its technology being borrowed from the EQS.

Teased as early as 2018, when the current generation of the Mercedes-Benz G-Class was introduced, the electric G-Wagen was hinted at by former Daimler CEO Dieter Zetsche in a discussion with none other than ‘G’ fan and fellow Austrian Arnold Schwarzenegger, so the model has been a long time coming.

Even though the EQG is still but a concept, Mercedes-Benz has let slip enough information to speculate on what we can expect from the upcoming battery powered G-Class.

All-wheel-drive was already a given, but now we know it will be available thanks to four electric motors, not just two, accompanied by “shiftable 2-speed gearbox” that can further improve the model’s off-road performance in low-grip conditions.

Even though the production EQG will be built on the same ladder-frame chassis as the ICE version, Mercedes-Benz mentioned that the rear rigid axle will be modified for a new type of suspension, most likely to accommodate the two rear electric motors.

The main piece of technology borrowed from the EQS is likely to be in-house developed and manufactured battery, which has a maximum usable energy content of 107.8 kWh.

Judging by the massive weight of the G-Class architecture and its distinct lack of aerodynamic prowess, we can’t help but speculate that the range of the EQG is likely to be even lower than that of the GLC-based EQC, so we might be looking at a sub 400 km (249 miles) WLTP range.

In other words, it’s not clear what kind of customers is the car addressing to, as most off-road tracks are well outside the confinements of a modern city.

That said, Mercedes-Benz is proud to mention that the model will be put through its paces on the famous Schöckl mountain off-road test track, not to mention that it will be able to have a climbing capacity of up to 100 per cent on suitable ground, just like its ICE brothers.

As for the Concept EQG, we’re looking at a highly urban-looking G-Class with 22-inch wheels and tires with low sidewalls, a black radiator grille, known as the ‘Black Panel Grille,’ and all kinds of white LED strips that we know from other EQ models.

Even the legendary spare wheel cover on the rear door has been replaced by a lockable box with white illuminated accents, whose design is reminiscent of a wallbox, and which can be used to store the charging cable. 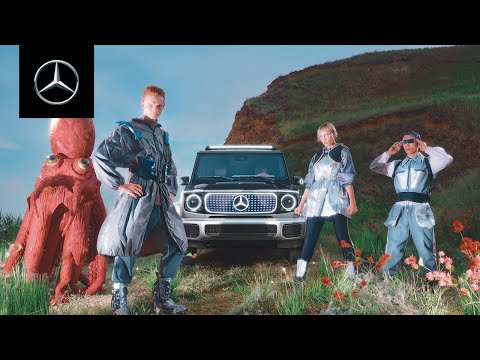