2 Mechanic Hammers and Welds Audi RS7 Wreck Back into Shape

3 Watch a BMW X5 With Serious Rear Damage Get Repaired

But nothing compares to that original BMW 7 Series, which was basically two car halves welded into one. This comes pretty close though, a repair that will give people looking to buy a used premium vehicle endless nightmares.

The subject is a second-generation Mercedes CLS-Class, which arguably looks meatier than its replacement. You need one of these if you want to pull off that whole "I'm a Russian mobster" look, preferably with a V8 like this CLS 550. Shame Mercedes doesn't offer one of those!

Anyway, the four-door coupe has suffered some hardcore rear-end damage, leaving its trunk mangled. It's so bad that the gaps in the doors don't line up. The tear-down for one of these projects is always enjoyable, as you get to find out what's under there. Arthur finds sever damage to the right-side chassis rail. It needs to be cut out, along with the spare tire area of the floor. It sounds way easier than it actually was.

After some finessing with the angle grinder and pulling, the CLS is ready to have donor panels, including a new trunk. The wing is put back into place and led is used to make the connection flush with the roof and door frame. We would have loved to see the paint process for this as well.

And that's not even the end of it. The CLS still needed new rear suspension components and a fresh coat of silver. The damaged CLS must have been really cheap to buy, because that's a lot of work for a car that doesn't have as much value as an SUV of that era. 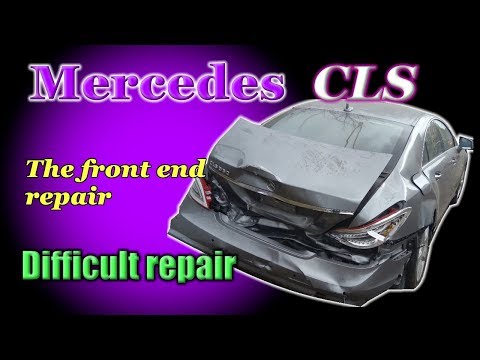