2 Mercedes-Benz Issues Two Separate Recalls in the Same Day, Both Add Up to Less than 900 Cars

With Christmas still a very vivid memory, you’ve probably had enough of flashing LEDs to last until next time Santa will be visiting, so please excuse Mercedes-Benz for finding the worst possible time to show us its new MULTIBEAM LED headlamps.
1 photo
The lighting technology has moved ahead rapidly. It was only a few years ago that we were very excited about the cornering ability of our xenon lights, and more recently we’ve been given the opportunity to forget about the high beam switch, allowing a computer to take care of that.

Initially, LEDs were used on cars for their exceptional output/energy consumption ratio, but somebody quickly realized that their small size was a great asset too. Unlike before, the headlamp didn’t have to be made up of a single light source for the road lights and one for the high beam - a housing of the same size could host plenty of high-power LEDs, allowing the engineers to use them at will.

We’ve all seen the Tesla Christmas light show, but that’s not what we’re having in mind here. Since the purpose of the headlights is to ensure maximum visibility during nighttime without becoming a nuisance for the other drivers, the idea of the “smart headlamp” came about.

Mercedes-Benz wasn't the first company to use multiple LEDs (or an LED matrix) for creating dark cones that protect the other drivers from glare on a production vehicle, but it quickly made up the lost ground and it now offers a very powerful solution on most of its models. And since it’s Mercedes-Benz, it also got an all-capital letters name: MULTIBEAM LED.

Things escalated quickly, and now the new E-Class has no less than 84 individually controlled high performance LEDs that will light up everything that matters up ahead while also sparing everyone that might be blinded by the strong fascicle of light.

Yeah, it’s not exactly the type of feature that will make you say “shut up and take my money,” but it is impressive when witnessed for the first time, not to mention it’s a very important safety boost. And Mercedes-Benz is also marching on another aspect: design. Doing away with the voluminous bulbs means the designers have a lot more freedom to create beautiful shapes that better reflect the new direction the Stuttgart brand is headed towards. See for yourself in the video below. 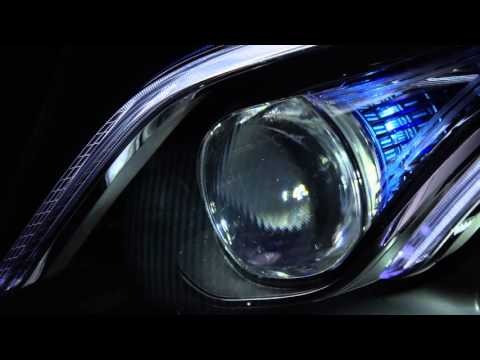