Home > News > U-turn
Vlad Mitrache
Normally, whenever I see somebody using a protective film over their smartphone's screen, I immediately think they are a cheap person that wants to make as much money selling their phone as possible, even though that means ruining the experience of owning it a little.
1 photo
Watching this clip from Autogefühl, I felt the same thing. And then the presenter went on to show us how the system works, and it all started to make sense. Of course, he didn't just apply the protection for this clip, so he's not completely off the hook - if that was really his phone, that is - but if you think of buying a Mercedes-Benz E-Class with this feature, you might want to think about it.

Fearing the system could be operated by mistake while the phone is in the pocket, Mercedes-Benz decided to prevent the car from moving as long as the user doesn't continuously rub his finger on the screen, drawing circles. This guy might have been overdoing it a little, but he did it so vigorously that it looked like the car was moving with the energy produced by his movement. Plus, this is a technology that's supposed to make you look cool while using it. Try smiling at a girl while standing next to the car doing that with your finger, and you'll end up with either a purse smacking your head, or a sexual harassment lawsuit.

The conclusion is that while these features are cool to impress your friends once, you're better off learning how to park yourself. A reverse camera and a full set of parking sensors are enough to perform all the maneuvers made by the car's systems better and faster. The guy with the microphone said that the E-Class got very close to the other cars, but that was just his impression because he wasn't in control. A human driver who knows his car will do it just as well.

And then there's the issue of the price. This thing doesn't come cheap, you'll imagine, especially since it's packed together with other options that confer it a highly prohibitive price. And regardless of how many bragging rights a car that parks itself gives you, your self-esteem will always feel better after performing the maneuver yourself. You know what they say: chicks dig scars and people who know how to parallel park. Or something like that. 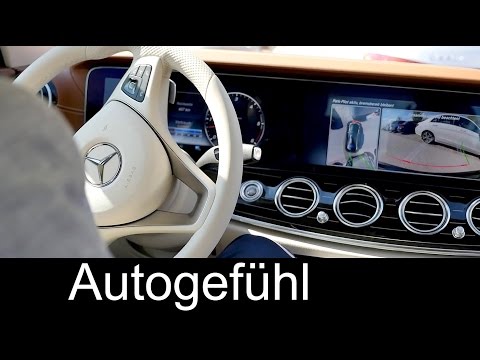