1 Genesis Opened Its House in New York, It's a Korean Oasis

It can't be more than ten years ago when comparing any vehicle wearing the Hyundai badge to a Mercedes-Benz was not only pointless but also quite ridiculous. Well, a few significant strides from one of the manufactures coupled with a conservative approach from the other, and the juxtaposition isn't really at all surprising anymore.
11 photos

Several non-premium brands have made occasional incursions into the upper layers of the automotive industry, offering similar levels of quality at slightly lower prices. Doing that isn't rocket science, but the reason why we don't see it more often is simple. Two aspects work together two make this strategy a doomed one right from the start: these cars will inevitably be more expensive than the rest of the brand's offerings, and they will never offer the same level of prestige as traditionally premium automakers will.

The advent of the electric vehicle must be seen by some companies as a chance to start from scratch and reposition themselves on the industry's ladder. One perfect example is Hyundai's IONIQ 5, the all-electric hatchback that shows everyone playing safe might be less risky, but it's boring as hell.

One of the companies whose EVs have disappointed the most is arguably Mercedes-Benz. Despite moving rather quickly with its EQ range - at least compared to its direct rivals - the vehicles themselves have felt rushed and unimaginative, not to mention completely underwhelming under their technical aspects.

The Mercedes-Benz EQA makes no exception, hardly hiding the fact it's a GLA-Class with an electric powertrain and a solid, glossy grille. After years of people complaining about how exaggerated (unnecessarily weird) EV designs were, it seems some companies have gone the exact opposite way, releasing their regular models but with electric propulsion. It's too early to judge if it's a winning strategy, but at least in the case of this head-to-head comparison, we highly doubt it.

It's not just about the appearance, either. Developing a car from the ground up to be an EV means you can make use of all the inherent advantages of this type of propulsion. This becomes instantly obvious when looking at these two: the IONIQ 5 has an abundance of interior space, a much larger trunk, and a frunk as well, whereas backseat space in the EQA is only decent and the trunk space is very limited, and the frunk is missing altogether.

Despite its boxy look and seeming lack of aerodynamics, the Hyundai also offers the longest range of the two, as well as better dynamic performance. Present here in its mid-level version (2WD, 73 kWh battery, 215 hp), the IONIQ 5 has a WLTP rating of 481 km (299 miles) and a 0-62 mph sprint that will make Tesla owners scoff, but at just about seven seconds, is actually more than decent.

The EQA, on the other hand, also features a front-wheel-drive-only 250 model, which gets just 190 hp and a maximum range of 263 miles (423 km). Its acceleration is even more terrible, but it makes up for that with a better ride quality, superior handling, and an overall more engaging driving experience.

For EV drivers, however, that might not rank too highly on the list of priorities. They'll be much more interested in the South Korean car's ability to travel a longer distance, not to mention suck up charge at more than twice the speed of the EQA (220 kW vs, 100 kW).

With prices more or less comparable, the debate between these two cars not only makes sense but also seems to provide an unlikely winner. The Merc comes with all the weight behind its badge and the more conventional design (some people will appreciate it), but just by looking at them parked next to each other, you can tell which represents the past.

The Hyundai, on the other hand, plays into the EV strengths and doubles it up with the kind of bold design we don't seem to see from most other manufacturers. It looks like a concept car on the street, and the younger generation won't get enough of it. Luckily, looks aren't its only trick, and so the electric Hyundai is the worthy winner of this head-to-head duel. 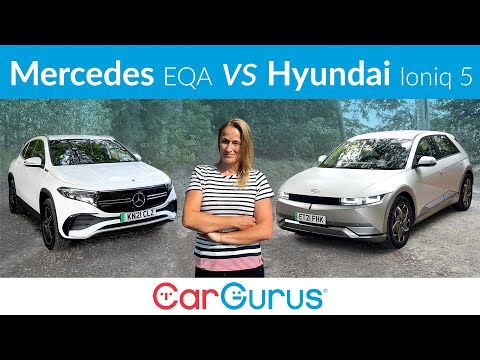