3 2017 Mercedes-AMG E63 Gets a Realistic, If Somewhat Underwhelming, Rendering

Vlad Mitrache
The new E-Class might have launched earlier this year, but that was just the beginning of a range that will see a wagon, a coupé, an AMG version and, if we’re lucky, maybe even a convertible added to the lineup.
1 photo
And now that we think about it, there is also the long-wheelbase version to consider, so, yeah, there is still work to be done for the Mercedes-Benz engineers and test drivers. And also for the spy photographers who bring us all the images and video footage of the cars when they leave the safety of the testing facilities.

The E350e plug-in hybrid model has already been shown at the North American International Auto Show this January, but it was just a static presentation with the cars expected to hit the dealerships during the first half of this year. It will first go on sale in Europe and then make the trip to the States sometime during the summer.

There isn’t a lot setting the hybrid version of the E-Class apart from its internal combustion engine sporting counterparts, but there are a few telling details. First, there’s the front bumper that has fake air vents for better aerodynamics, which in turn translates into better fuel efficiency and lower CO2 emissions.

At the rear, there’s the charging port located just under the right-hand side taillight, just like on the rest of Mercedes-Benz’s plug-in hybrids. The interior is also the same, but you won’t hear any complaints about that, as Mercedes has replicated the masterful craftsmanship we’ve been seeing on the S-Class for the past few years.

The powertrain is made up of a 2.0-liter gasoline turbo engine that, together with the electric motor situated in the gearbox, develops 279 hp and 442 lb-ft (600 Nm), so dynamic performance won’t be too shabby either. But for a car like this, it’s the efficiency that counts and the Mercedes-Benz E350e claims a combined fuel economy of 135 mpg and CO2 emissions of just 49 g/km. Also, the E350e will offer up to 19 miles (30 km) of pure electric range. 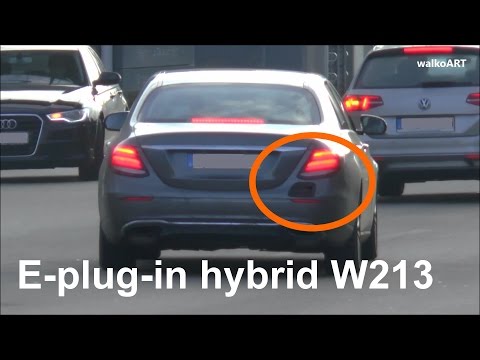