Alex Oagana
The drag race of the century will probably take place when the last sports car with an internal combustion engine will be pitted against an electric sports car.
1 photo
Sadly, we are probably not that far from this future, but until it comes we can still rejoice knowing that the good ol' V8 powerplant is still alive and kicking, even if it has to endure the addition of turbochargers and most are strangled for emissions and fuel economy reasons.

Despite this, the peeps from AMG for example, are among the last promoters of old-school V8 power, keeping the eight-cylinder exhaust roar alive in almost every model that they manufacture.

Such is the new E 63 AMG S-Model, which puts its M157 engine to the best of use when fitted with 4Matic all-wheel drive, a system that's currently an option in Europe, standard in the US and not available in right-hand drive countries.

Almost unthinkable a few years ago, there is now an electric sports sedan which has rather similar acceleration numbers, with the naught to 100 km/h (62 mph) taking just 4.4 seconds.

Powered by an electric motor, the Tesla Model S is therefore an almost perfect example for a pre-enactment, if you like, of the future drag race that we were talking about earlier.

The following speedometer video shows a naught to 200 km/h (124 mph) acceleration of both a Mercedes-Benz E 63 AMG S-Model and a Tesla Model S P85, which is obviously made a little bit funnier by the cars' rather similar names. 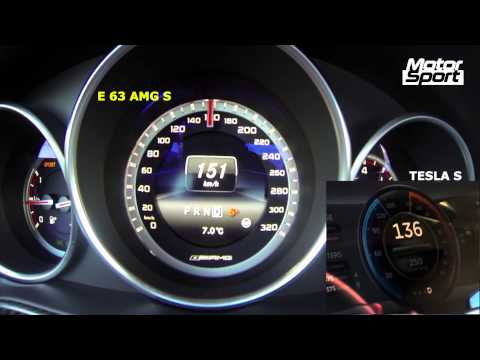