1 Mercedes-Benz Confirms New GLS and SL Will Be Launched This November - Probably in L.A.

Vlad Mitrache
If recent studies are to be believed - as well as the obvious direction the market is headed to - electric vehicles will become the norm in a few decades’ time.
1 photo
Some manufacturers are readier than others to face these changes, with Mercedes-Benz having to adjust quickly after its main rival’s program produced the excellent BMW i3 electric town car. So Mercedes-Benz took a shortcut and used a modified version of the Tesla Model S powertrain on its electric B-Class MPV (or Sports Tourer, as the company refers to it), despite toying with the idea themselves in the shape of the SLS AMG Electric Drive.

That meant the B-Class received an electric version just before the end of last year, and it had some promising numbers to boast about. In short, the B-Class Electric Drive (or B250 e) came with a 179 hp engine with 251 lb-ft (340 Nm) of torque and a 124 miles (200 km) maximum range thanks to a 28 kWh battery pack.

Dynamically speaking, the B-Class Electric Drive didn’t sound too bad either. It had an official 0-62 mph (0-100 km/h) time of 7.9 seconds and a top speed of 99 mph (160 km/h) that was limited electronically for obvious range-related reasons.

That being said, it’s still a far cry from Tesla Model S’ performances, and slightly worse than those of the BMW i3 (7.2 s for the 0-62 mph/0-100 km/h). On the other hand, compared to the i3, the B-Class Electric Drive offered a full five-seat configuration with plenty of space and, as the company officials enjoyed pointing out at that time, four normal doors. It was obviously bigger and heavier than the i3, which would explain the negative performances despite the extra power (184 lb-ft compared to Mercedes-Benz’s 251 lb-ft).

Here we have some user-made acceleration tests in the car’s different driving modes (E+, E, and Sport) from zero to 62 mph (100 km/h) and from 31 to 56 mph (50 to 90 km/h). While the B-Class Electric Drive isn’t particularly impressive, you’ll see it delivers quite constantly regardless of speed or driving mode. Here’s the video: 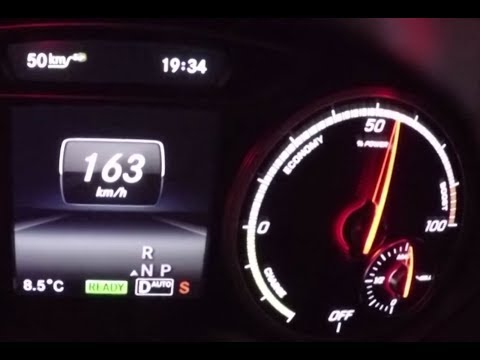