2 When It Comes to Camper Vans and RVs, Mercedes-Benz Proves Bigger Is Always Better

5 Yes, This is a Caterpillar 797 Carried by a Mercedes-Benz Actros
Car video reviews:
Up Next

Mercedes and Scania Trucks Have the Strangest Drag Race Ever

We haven't been so excited about a truck video since the days of silly Volvo commercials. Carwow put together a drag race between a Mercedes Actros and a Scania R500. Even if you know almost nothing about these trucks (a bit like us), we promise it's a very entertaining clip.
4 photos

No matter where in the world you live, you probably see tractor-trailers or semis once in a while. And if you're passionate about driving, you'll probably wonder what it's like to be behind the wheel of one of these giant machines. Old Top Gear tackled this subject in many challenges which painted old trucks as difficult to drive.

However, technology has progressed at a rapid pace over the past decade. Automatic gearboxes and safety systems are becoming more common, making the job of a professional driver a little easier and safer. Mercedes specializes in high-end, advanced vehicles, and this even applies to the Actros.

The vehicle Mat Watson is in comes with mirrors instead of cameras and packs the same crisp screens as your Mercedes luxury sedan or SUV. It even has a push-button start for its 480 horsepower 10.7-liter engine. Meanwhile, the Scania is equipped with a 13-liter engine with 500 horsepower. Mat Watson isn't too happy about being in the truck with less power, but Mercedes reportedly said theirs is better anyway.

According to the guy who brought the trucks, it took him about five months in total to learn how to drive machines like these well, and you obviously need to have a special license too. Mat and Yianni have neither, so this is going to be entertaining. So, what exactly happens?

The first race goes to the Scania because Mat doesn't know about "power mode" in the Mercedes. The second race also goes to the Scania, as there's apparently a delay in the Actros' gear changes. All we know is this looks like fun, especially the brake test that follows. 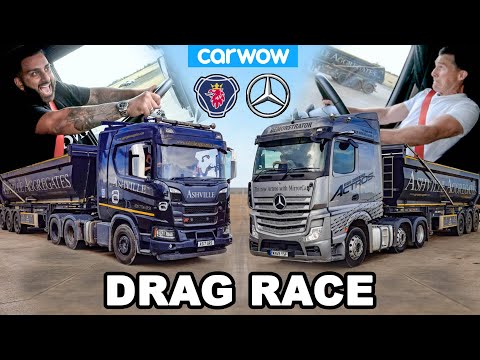