On the market for about a year or so, the Mercedes-AMG GT has established itself as one of the coolest and most exciting road cars out there. Powered by a  4.0-liter V8 engine, it promises quite a fight should another four-wheeler challenge it to a duel.
6 photos

But whereas there are few cars that can match it on the road, could something that flies be a challenge for the GT? If pitted against a racing drone, would it fare just as good? This past weekend, Mercedes published a video that answers these exact questions.

On the Estoril race track in Spain Portugal, a roadster version of the Mercedes-AMG GT with its top down took on a racing drone in three drag races.

One of the machines won, 2 to 1, but can you guess which? Let’s punch in some numbers.

The V8 in the GT provides for a total of 476 hp and 630 Nm of torque. That translates into an acceleration time of 4 seconds or so, which for a road car is quite impressive.

The drone, on the other hand, told us nothing about the torque it develops. But whatever the numbers are, the thing can reach 100 kph (62 mph) in just 1 second. No typo there, we really mean one second.

On the track, the car was driven by professional driver Niki Schelle, while above it the drone flew piloted by Mitch Hakon Becker. As said, the two machines went at it three times, in drag races of 100, 200 and 300 meters, respectively.

As you already guessed, the incredible acceleration the drone is capable made all the difference in the world, as the Mercedes-AMG GT was left chasing it hopelessly to the finish line in the first two runs.

You can watch all three runs in this unlikely drag race in the video attached below. 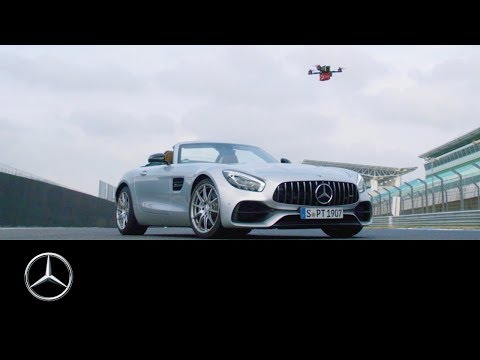