1 Video: Jump Inside the Mercedes-AMG One Hypercar As It Laps the Hockenheim POV-Style

2 Lewis Hamilton and George Russell Check Out the Mercedes-AMG One, They Don’t Drive It Yet

3 Former Racing Driver Susie Wolff Tests Out the Mercedes-AMG One, It Was "Pure Joy"

4 Banned in the U.S.A.: Mercedes-AMG One Hypercar Won't Be Living the American Dream

5 2023 Mercedes-AMG One Hypercar Debuts With F1 Powertrain, DRS Mode, and No Porpoising
Car video reviews:
Up Next

New VW Boss Might Say Nein to the Volkswagen Golf 9, Decision Still Not Made

Mercedes-AMG One Prepping to Smash the Nurburgring Nordschleife Lap Record?

After many delays, the Mercedes-AMG One was officially shown to the world a couple of months ago. So, what are they still doing testing prototypes on the Nurburgring?
11 photos

The answer might be way too obvious, as they could be chasing after the lap record for production cars, with last-minute preparations. To break it, the F1-powered hybrid hypercar will have to be faster than the Porsche 911 GT2 RS from Manthey Racing, which is the current record holder, with a time of 6 minutes and 38.835 seconds on the Nordschleife configuration of the famous German racetrack.

Caught doing the usual laps on what can only be described as the equivalent of a driving Mecca for petrolheads, this prototype sure looked mighty fast and planted. Besides the visual part, the video, uploaded on YouTube earlier this week, and embedded at the bottom of the page, is a great way to learn about the soundtrack too, and there is a lot happening in this department.

An all-electric driving range of 11.2 miles (18.1 km) is possible, too, in the German exotic machine, whose production is capped at 275 examples. Priced at the equivalent of around $3 million each, all of them were spoken for, and none will make its way to our market, as they are not homologated for road driving in the U.S. of A. 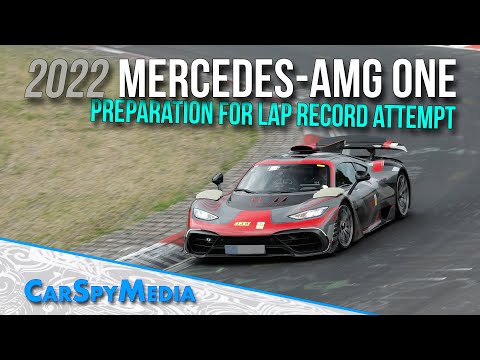