2 Mercedes-AMG One Prepping to Smash the Nurburgring Nordschleife Lap Record?

3 Lewis Hamilton Tests the Limits of the New Mercedes-AMG One on the Track, "It Feels Great"

4 Video: Jump Inside the Mercedes-AMG One Hypercar As It Laps the Hockenheim POV-Style

5 Lewis Hamilton and George Russell Check Out the Mercedes-AMG One, They Don’t Drive It Yet
Up Next

Mercedes-AMG One Gets Reviewed on the Nurburgring GP Track, Sounds Good to Us

Sebastian Toma
Mercedes-AMG has finally let people outside the company drive their hypercar, the Mercedes-AMG One. The German marque decided for a press launch in style, which involved the Nürburgring GP circuit. A nice bonus, along with a safety measure is to have DTM champion Bernd Schneider in front of whoever was testing the One, just to keep the pace and show the ideal racing line.
8 photos

The hybrid hypercar has been in the works for many years now, almost too many some might say, but it is here. Back when this model was announced, the marque intended to offer something as close to a Formula 1-engined vehicle as possible, but in a form that can be used on public roads.

Developing the Mercedes-AMG One took a bit longer than everyone expected, but it has been finalized, and deliveries should begin soon. Among its distinctive features is a V6 engine that is close to the one found in Formula 1 racing cars, but made to run on pump gas, as well as comply with international emissions regulations.

The video that you can watch below shows Mat Watson of carwow as he gets his first drive on the Nürburgring GP track in a Mercedes-AMG One. The British journalist is fortunate enough to experience this track in a hypercar, despite it being the first time he is on it, and the vehicle in front has a (retired) professional racing driver behind the wheel, so all Mat needs to do is to follow his lead.

DTM Champion Bernd Schneider in an AMG GT Black Series is the “pace car” on this test, and his role is to guide all the reviewers on the track in a proper rhythm, but without allowing them to go too far with the late braking, or with unusual racing lines.

After all, these cars are part of a limited series, they are expensive to insure, and nobody wants to be the one to crash the test drive car on the track during an event.

We are not going to ruin the video for you, so go ahead and watch it below to hear Mat's conclusion on the One. 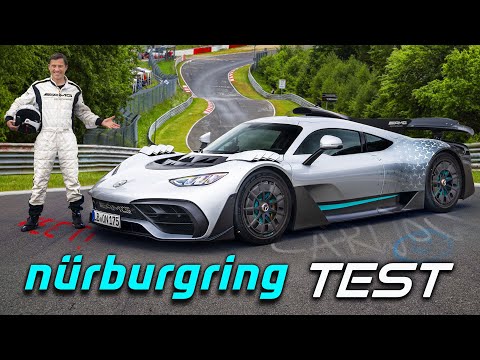