1 Watch an SLS AMG Being Ripped Apart In a Junkyard, Try Not To Cry

Tudor Rus
The only thing in common for the two contestants in the video is the S letter in their names and their V8-based powertrains. Even so, someone thought they'd be proper material for a neck-at-neck duel.
1 photo
We've seen how the Internet of things is being flooded daily with videos where two cars battle on the drag strip, trying to get as fast as possible on the other end of the asphalt patch using massive amounts of horsepower in the process.

So, we guess a fight between the Mercedes-AMG GT S and the McLaren 650S can't do too much harm, right? So, let's introduce today's competitors, so you can make an idea of what we're dealing with in this UK vs Germany duel taken into the car world.

The GT S has a 4.0-liter twin-turbo V8 engine producing 510 horsepower, which it sends to a 7-speed transaxle twin-clutch gearbox. Later on, Mercedes will also introduce a cheaper, less powerful version, but we don't care about that now to be honest.

In the opposite corner, the McLaren 650S comes packed with 650 horsepower coming out of a 3.8-liter V8 and a Launch Control feature that doesn't sound like good news for Mercedes-AMG's latest hotshot, but sometimes the driver makes a huge difference in this type of encounters and we're sure you already know.

Now, if you're a cultured petrolhead you've probably seen what the two models can do in a drag race. That should help you with anticipating the outcome of the race captured in the video below because we're not telling you how the race ends since we don't do spoilers here at autoevolution.

Before we let you enjoy the video below, allow us to add that the duel starts from a rolling start, but we're pretty sure this has nothing to do with the outcome. 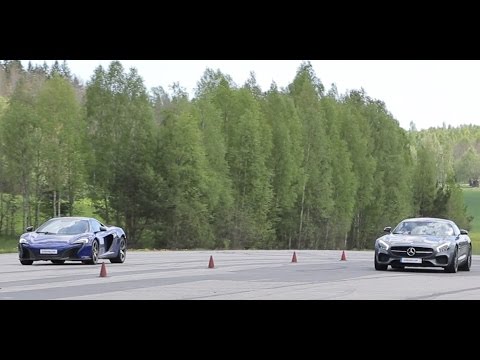