2 UPDATED: Woman Jumps Out of Her Moving Hyundai in California, Car Causes a Crash

Andrei Tutu
To the best of our Bang knowledge, neither the Mercedes-AMG GT, not the Mercedes-AMG C63 have had any documented crash so far. Well, the oh-snap moment is here and this isn’t the only piece of Affalterbach-related bad news - the two vehicles have crashed into each other.
1 photo
The memorably-dark event took place recently in South Africa, where the carmaker put on a show for customers. A group of AMGs including two units of each model was performing a slalom stunt on the track when the accident took place.
The accident was a rather serious one
The event was hosted by the Zwartkops track and there doesn’t seem to be any doubt about what led to the crash. As you can see in the video below, which comes from Zero2Turbo, the two pairs of vehicles were supposed to “flow” through each other as carbon fiber weaves.

Alas, the driver of the yellow AMG GT fell behind schedule, leading to the blue C63 plowing into the side of the sportscar. Remember, this is South Africa we’re talking about, so that was a driver’s side impact. The crash was not a soft one, with the force of the crash pushing the coupe onto the grass.

Both vehicles were totalled in the accident, as the crash resulted in serious damage and deployed airbags. Fortunately, both drivers walked away from the accident, but one of the did reportedly suffer minor injuries.

Such moves are thoroughly rehearsed, with drivers following a strict choreography. Stunts like this have been around for decades, with many of them involving non-performance cars and using a much larger number of vehicles, as well as more complex moves. Crashes are rare, so we must be dealing with one of those exceptions that prove the rule. 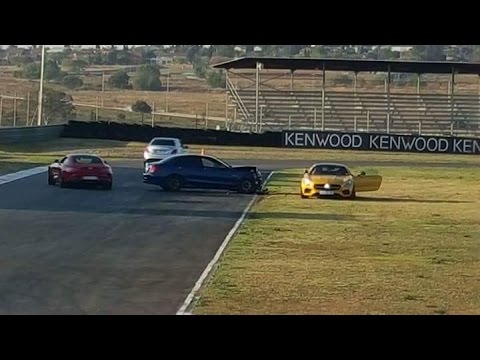