Home > News > Industry
Alex Oagana
With its rather cozy interior having already been revealed by Mercedes-Benz, the AMG GT (C190) is still keeping its supposedly gorgeous exterior away from the spotlight for the time being, but this doesn't stop the engineers to further hone its driving dynamics on the famed Nurburgring Nordschleife.
1 photo
Caught tackling the 154 turns of the Green Hell, the Mercedes-AMG GT pre-production prototype caught by TouriClips in the following video is using the same body camouflage that most Mercedes-Benz prototypes have been using in the last 3-4 months before their unveil, confirming once again that the production version will be officially launched this Fall.

As most of you know, the AMG GT will be powered by at least three versions of an all-new V8 engine, created by combining two M133 four-cylinders from the A 45, CLA 45 and GLA 45 AMG.

With a displacement of four liters and internally codenamed M178, the new twin-turbocharged V8 uses twin-scroll turbochargers that sit inside the cylinder lines, just like in the BMW S63 and the Audi 4.0 TFSI engines.

The combination between direct injection, twin-scroll turbochargers and the reversal of the intake with the exhaust manifold is apparently improving the engine response to such a level that it drastically minimizes lag.

Insiders say that the M178 will have a throttle response not unlike a naturally-aspirated engine, with no lag whatsoever, but that remains to be seen when the car is actually launched.

Since the AMG GT is using a reworked aluminium spaceframe borrowed from the SLS AMG, it will have a similar positioning of the powertrain. In other words, it will be a front-mid engine with a transaxle dual-clutch transmission.

Expect more information about the upcoming sports car in the next couple of months, as it nears is projected September unveil and October launch, most likely at the 2014 edition of the Paris Motor show. Meanwhile, have a look at it torturing tires on the Nordschleife. 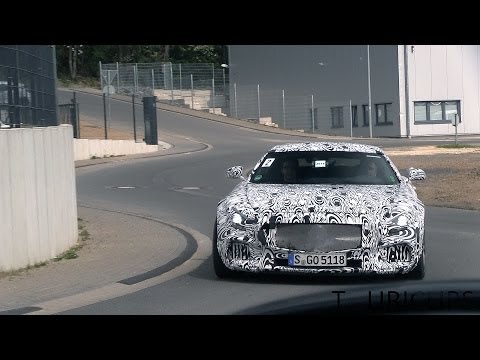