5 Mercedes-AMG A35 Pickup Is a Bad Acid Trip
Coverstory

Home > News > Car Profile
Mihnea Radu
Wow, what a cool gathering of cars, all eager to distinguish themselves against the latest and greatest four-door AMG model, the GT 63S.
6 photos

The boss of AMG previously hinted that the 4.0-liter V8 has reached the limit of what they can do for a production car. When under the hood of the 4-door that also wears the letter S, it produces 639 HP and 900 Nm of torque.

Of course, tuners can extract more. And one example of this is Brabus, who makes an engine kit called the Powerxtra B40-800. Guess how much power that makes. But based on the performance of the E63 in this drag race video, we could be dealing with the cheaper 700 horsepower package. That's still a big increase, especially considering the E63 is a little lighter than the AMG GT 63 S, even though they are based on the same platform.

If you want to know what the stock model manages, look for the E63 without the modified exhaust; there's one of those in the video as well. Quite a few Audis have also gathered at this European drag race event, including familiar TT RS and RS3 rockets. They have fantastic launches, but the big gun here is the RS6, which has some kind of engine upgrade from ABT. We know of versions with 700 or 720 HP.

Since the two share a name, everybody probably wonders how the 4-door GT 63 S compares to its sportier 2-door counterpart. One such drag racing duel reveals that the bigger car is a little faster, thanks to its more powerful engine and AWD.

When the Alpina B7 lined up against the AMG, we knew it didn't stand a chance, but somehow, the outcome had us on the edge of our seats. We're dealing with a huge limousine that's big on luxury yet also features a modified 4.4-liter making 608 HP. 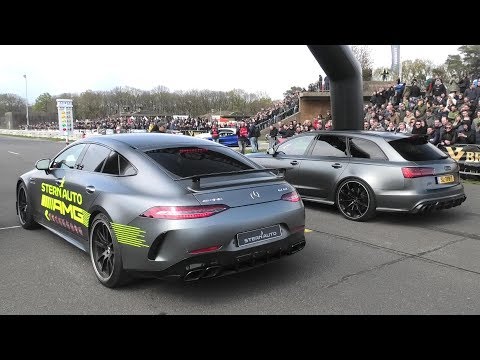