5 Mercedes-Benz GLE 63 Gets Inferno Tuning Kit From Topcar, Looks The Part
Car video reviews:
Up Next

Capable of sprinting to 100 km/h in 4.2 seconds and still an "off-roader," the Mercedes-AMG GLE 63 sounds like an amazing machine. But its image just got taken down a notch or two by this ridiculous crash.
1 photo
Many people say that SUVs are safer because they're big and sit further off the ground. While they are practical when dealing with rough roads, people just wanted more. Thus, we got performance SUVs, which are about as fast as a Porsche Cayman and sound beastly.

We've seen plenty of people taking SUVs to the track. In fact, most of the serious stuff is developed at the Nurburgring in Germany. But this crash video makes the GLE 63 Coupe seem as awkward as a hippo on ice.

The driver pushes the 585 horsepower, 2.3-ton vehicle too hard and it immediately rolls over. Some people are joking that it's got so much torque that it flipped the world upside down.

The incident happened recently in Nantes. Really, France?! We would have never guessed. Maybe Russia or the Middle East, but never France.

One commenter says he knows for sure that the car was just rented for a wedding. So not only has the guy crashed an expensive car, but it's not even his? And why would you even rent something like this for an event?

At speed, you can flip any car over. However, you might have heard of a feature called electronic stability control. Right before the flip, you can see the front left wheel lifted up into the air. Way before that point, the computers should have stopped the driver's throttle inputs. So the safety systems are clearly off.

But it's pretty impressive how badly he crashed at something like 20-30 km/h. A cheap car would just slide into understeer, even at double that speed. Maybe the extra-wide tires of the GLE dug in on the side that still had traction. So it's like the SUV equivalent of a perfect storm. 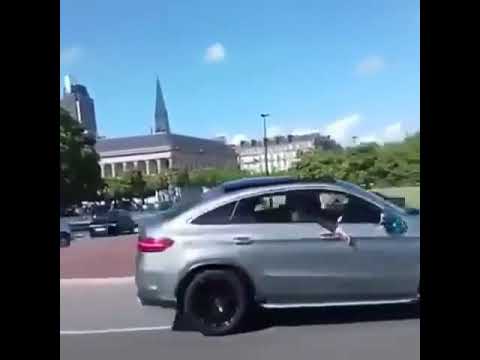