Home > News > Spyshots
Mihnea Radu
A few years ago, people would have thought it was a bad idea to put a 2-liter turbo engine in a family crossover. This would make the car too thirsty yet not as exciting as a hot hatch. But the industry has changed, and performance crossovers are seen as desirable. Mercedes is preparing one of its own, the GLB 35.
1 photo
Usually, companies first launch a model and then start work on the hot version. However, the GLB-Class hasn't been shown yet. For many years, it was just a rumor, the "baby G-Class" of fable. However, work on the GLB 35 4Matic is already in its advanced stages.

Most normal GLB models are probably going to ship with the 200 or 220 d 2-liter engines, which would be frugal for longer journeys. However, the GLB 35 will have about twice the power of the 200 d from a system we already know about. The same 2.0-liter turbo already powers the A 35 4Matic, where it produces 306 HP and 400 Nm.

The output is about the same as three indirect rivals from VW Group, the VW T-Roc R, Cupra Ateca and Audi SQ2. We can't help remembering that BMW offers you 50 Nm more in the X2 M35i. Being an "SUV," The GLB model will probably be about 200km heavier than the A 35. However, that's still better than a big toy like the GLC 43 or a performance wagon such as the Audi S4.

Power will go exclusively to a 7-speed DCT gearbox and AMG-tuned 4Matic electronically-controlled AWD. Suspension, braking and other elements will also be more sporty than they would be for a normal GLB. In fact, we even see a dual exhaust system on this prototype. But it's a standard industry practice to install more soundproofing and turn down the volume on a family-friendly performance vehicle.

Although the GLB 35 4Matic won't be a common sight at the Nurburgring, it's going to smoke plenty of traditional sports cars. We expect an official 0 to 100 km/h sprint time of around 5 seconds flat and the usual electronically limited top speed of 250 km/h (155 mph). 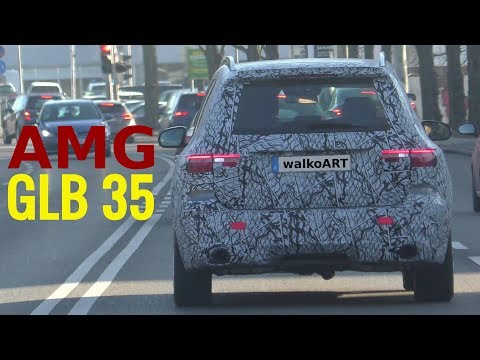