Mihnea Radu
The new Mercedes-AMG G63 is much faster than its brick-like design would lead you to believe. But can this V8-powered locomotive beat an RS3 and a Cayman GTS?
3 photos

The numbers make this battle difficult to judge. The G63 is in a completely different class from the other two, being a serious off-roader that just happens to be decently fast in a straight line. It also costs a small fortune to buy. Rory Reid says this is a David vs. David vs. Goliath battle without suggesting the bigger car would lose.

Top Gear's numbers, which seem to reflect the fully-loaded weight of these cars, still reveal that the AMG is heavier by a ton than either of its rivals. That's one full Mazda MX-5 or Suzuki Swift's worth. To compensate for this, the 4.0-liter twin-turbo AMG engine makes about twice as much torque as the Porsche Cayman GTS's 2.5-liter boxer engine. The power gap isn't as big, though.

You'd expect a light and nimble Porsche to do more with less. But drag racing is all about instant power delivery and AWD traction, giving the RS3 an obvious advantage over it. Still, the real weight difference between the two is closer to 100 kg, and we honestly expected the two blue cars to be a little closer.

On paper, there's only 0.1 of a second between the two when it comes to 0 to 62mph sprints, yet the RS3 is pulling away cleanly. But it's not the first or the last RWD Porsche to lose a drag race.

By about the middle of the track, the RS3 also caught up to the more powerful G63 and eventually wins the race by a nose. The way in which it does this suggests the Audi would have been faster in a rolling race too, as the aerodynamics of the Mercedes would play a larger part. 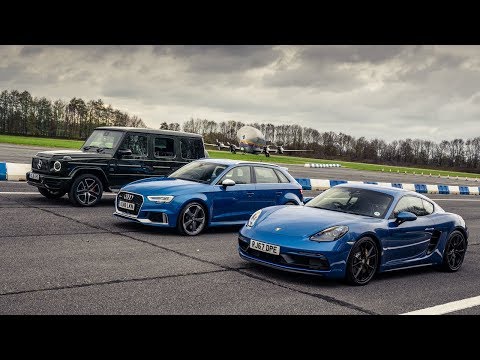