2 These Audi RS6 Models Are Lit, Each With Its Own Set of Custom Wheels by Vossen

Looking at today's drag race I must confess that I am rooting for the Audi RS6. The closest I've been to experiencing one, was when I rode shotgun with one of my friends, which has a 700-horsepower RS7. And while I wouldn't say no to a Mercedes-AMG machine, the Audi just seems more appealing to me, at least in this class of cars.
17 photos

I imagine it can be a lot of fun to drive around in a 600-horsepower station wagon. Not everyone is going to be able to tell the difference between a normal, family car and an RS6 Avant, so Audi's creation is quite the sleeper, especially if you start doing some upgrades to it as well. And there is certainly a lot of potential for tuning there. Not that it would be difficult to take the Mercedes-AMG up to 900 horsepower either.

Both cars are special in their way, and going into this race it can be hard to predict the outcome. Because both cars are powered by twin-turbo V8s, and both have AWD to play with. The Mercedes-AMG seems slightly more capable, as it's rated for a solid 603 horsepower and 627 lb-ft (850 Nm) of torque. Meanwhile, the Audi comes in at 591 horsepower and 590 lb-ft (800 Nm) of torque.

To top it all off, the Mercedes-AMG is lighter than the Audi, at 4,398 lbs (1,995 kg) versus 4,574 lbs (2,075 kg). Things would have been different in this department if the E63 S would have been a wagon as well, but this body type is not available in Australia. According to the math, the RS6 should be at a slight disadvantage overall, but it's not over until one of these two cars crosses the line first.

As they prepare for the challenge, we get to hear both cars revving their engines, and while the Audi doesn't sound half-bad, there's just something evil about the noise an AMG engine makes, and you can't help but like it. For the first run, both cars will be engaging their launch control modes. The RS6 is off to a brilliant start, making it look easy, and even though the E63 S does close in on its opponent, there are no changes in terms of ranking by the end of the run.

A street start is up next, and both cars are switched into comfort modes as if they're about to engage in an unexpected challenge. This time the tables have turned, and it's the E63 S that takes the lead, and it manages to win by a small gap, but a victory nonetheless. The third run marks the switch to a rolling race format, with cars starting from 31 mph (50 kph). It looks like a fairly tight race from afar, but an onboard camera reveals that the Audi is ahead of the game, and manages to just win by a small margin.

They decide to have another go in the same format, and they're neck and neck. But as they go past 105 mph (170 kph), the Mercedes-AMG retakes control of the race and scores another win. It was all a matter of adjusting the ESC settings, as on the first run its interventions were crucial in deciding the outcome. Looking over the telemetry results, the Mercedes-AMG is quicker both down the quarter-mile (402 meters) and up to 62 mph (100 kph).

It takes 3.51 seconds to get up to speed, and just 11.52 seconds to complete the run. So, at the end of the day, if you're oscillating between these two cars, it's probably going to come down to personal preference, because performance-wise they're fairly similar. 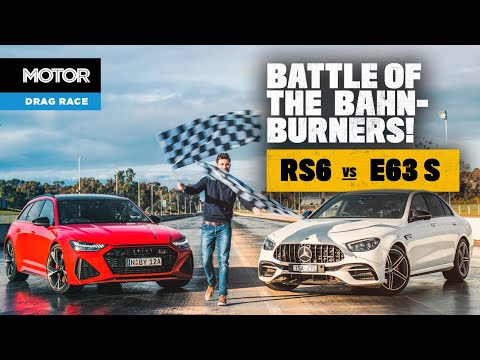