2 You Get What You Pay For: Mercedes-AMG SLS Drag Races BMW M3

Almost 40 years ago, BMW launched the first-ever M5. The E28 M5 used a straight-six engine which had an output of 282 horsepower. The E34 pushed performance figures up to 311 horsepower. The jump was bigger with the E39, as BMW made the switch to a V8 engine, capable of 394 horsepower. After a short V10 experiment, the German manufacturer went back to using a V8, this time with twin-turbos.
17 photos

People that grew up in the '70s and '80s will probably say that the E28 or the E34 were the coolest M5s ever built. '90s kids are probably still thinking about the E39, and I'm sure a lot of people still dream of driving an E60 one day. After all, who wouldn't want a luxury sedan that sounds sort of like an F1 car? But the V10 was deemed to be complicated and troublesome by many, and it made sense for BMW to switch to a twin-turbo V8 starting with the F10.Life's too short to drive boring cars
Even though the engine was downsized from 5.0-liters to 4.4-liters, the use of turbochargers meant an increase in performance. The E60 M5 was rated for 500 horsepower and 384 lb-ft (520 Nm) of torque, while the F10 pushed the envelope towards 553 horsepower and 502 lb-ft (680 Nm). Of course, the German manufacturer had to continue the development of the performance sedan, and so today, a stock BMW M5 is going to give you access to more than 600 horsepower!

And the people over at Mercedes-AMG weren't going to let their guard down either. Almost 30 years ago, you could buy a brand new E 60 AMG with a 376 horsepower V8. Fast forward to 2006, the E 63 AMG was on par with BMW's E60 M5, with both cars packing more than 500 horsepower. Although back in the day AMG vehicles were sometimes supercharged, these days, the company has also switched to using turbochargers for increased efficiency.

So choosing between a brand new BMW M5 and a brand new Mercedes-AMG E 63 S can be a difficult thing to do, as both these vehicles are now rated for 600 horsepower in their stock form. And if that doesn't sound like enough to you, going up to 800 or 900 horsepower is going to be like a walk in the park. At least if you don't mind spending the extra cash. You don't need overnight parts from Japan to tune your car these days
And it just so happens that for today's drag race, we're going to see two of these tuned luxury sedans going head to head down the quarter-mile (402 meters). The Mercedes-AMG E 63 S is an Edition 1 model that has been upgraded by Pure Tuning in the United Kingdom. It now has a Stage 2 ECU tune, among other things, and it's rated for about 800 horsepower and over 737 lb-ft (1,000 Nm) while running on race fuel. Thank God for AWD!

But how fast is it going to be, considering that it weighs in at 4,310 lbs (1,955 kg)? Considering that the stock car can go from a standstill to 60 mph (96 kph) in a little over 3 seconds, is this particular vehicle going to be capable of doing in a little over 2 seconds? Its opponent for today has been upgraded with multiple G-Power parts. This car is now running the GP-820 software, which costs about €4,600 ($5,267).

It's also packing reworked G-Power turbos, which will cost you an additional €5,950 ($6,813). Add €5,360 ($6,137) for the G-Power downpipes, €795 ($910) for the gearbox software upgrade, about €8,000 ($9,161) for the Akrapovic exhaust, and you've got yourself an 800+ horsepower M5. Torque figures are at the same level as for the Mercedes-AMG, so perhaps the biggest difference today is that the M5 is lighter at 4,089 lbs (1,855 kg).10-second cars are becoming more common by the day
The 0 to 60 mph test is the first challenge of the day. The Mercedes-AMG gets the job done in 2.89 seconds. The BMW M5 takes on the task with no launch control and manages to get an identical result. If you need to grasp how fast that is, consider the fact that a stock Ferrari 812 Superfast is estimated to get a similar result when subjected to this test. The quarter-mile run is up next, and it might help shed some light on how the main race is going to unfold.

The Mercedes-AMG is off to a strong start and crosses the finish line after 10.89 seconds. But the BMW's weight advantage is starting to show, as it's slightly faster, with a time of 10.76 seconds. Still, anything can happen for the main event as even the smallest driver error can influence the outcome of the battle. They both line up, and the M5 rockets into the lead right off the bat. 1,320 feet (402 meters) later, the M5 scores its second victory of the day.

At this point, it doesn't look like the Mercedes-AMG can stand a chance of winning the roll-race due to its extra weight. What follows next is a very close run and a photo finish! Upon closer inspection, it's obvious that the BMW was once again on top of the game, albeit by a small margin. The next run doesn't go as well for the M5 driver, who seems to have a late start. Strangely enough, we get to see the same outcome on the third and final run. That means the BMW just barely wins the challenge! 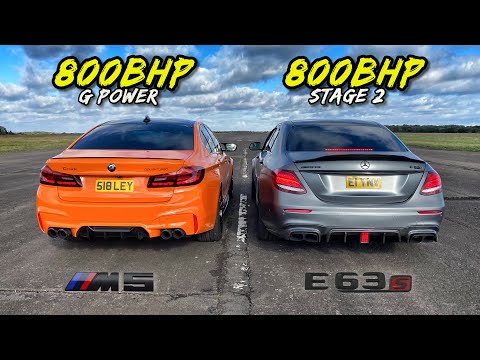