Vlad Mitrache
1 photo
Ever since the so-called AMG Sport line was introduced one year and a half ago, some people started crying that Mercedes was diluting the essence of its sporty brand by releasing these so-and-so models with the almighty badge on them.

Mercedes-Benz didn't care all that much and soon enough, almost all models launched since then have received one such version. Instead of the V8s (and the occasional V12) that usually powered the AMG models, this new line was to use a three-liter V6 bi-turbo unit that delivered a more than decent 367 hp. Needless to say, people who drove them were quite happy with the result, but that didn't end the purists' lament.

Together with the launch of the facelifted SLC roadster (ex-SLK) and, more to the point, it's sporty version, Mercedes-AMG announced the AMG Sport line was no more. Well, at least its name was gone because the cars remained untouched, except they were now fully-fledged AMG models. So instead of the Mercedes-Benz C450 AMG, the new car powered by the V6 engine was called the Mercedes-AMG C43. Simple.

How did the purists take all this? Like a blow to the head, probably, but who really cares about them? The real question is whether the C43 is every bit as worthy of the AMG plate as the C63. Luckily, somebody was selfless enough to sacrifice himself and find out.

Since it uses a V6 as opposed to the C63's V8, the C43 is sure to lose the acoustics battle. In fact, with less power, less torque, and only marginally lighter, the C43 will lose all battles. What actually matters is by how much? The C63 has a 109 hp advantage over the C43, and only 25 extra kilograms. The official 0-62 mph time also shows a 0.8 seconds advantage for the V8 car, but how will all these numbers translate on the road? Watch the clip below and find out.

While the 0-155 mph (250 km/h) acceleration time for the V6 is abysmally bad compared to the V8's, up until 124 mph (200 km/h) it's fairly close, and unless you spend most of your time on the German autobahns, even that speed is pretty much irrelevant. Besides, there's one aspect this video doesn't take into account, and that's price. The C63 is about 30 percent more expensive than the C450 AMG and, probably, it will still keep a fair margin over the C43. So not only is it worthy of the AMG title, it also offers a slightly less expensive entry into the possibility of owning one of these cars. 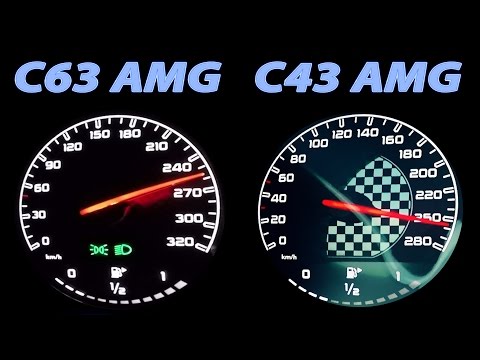