Mercedes-AMG A45 4MATIC Vs. Audi RS3 Sedan Is a Close and Even Track Battle

With one extra cylinder and 25 percent more displacement, the Audi RS3 Sedan should have a definite power advantage over the Merc, and yet the numbers only show a 20 hp and 4 lb-ft (5 Nm) gap between the two.
10 photos

Still, a drag race we showed you two weeks ago left no room for interpretation: the heavier Audi managed to trump the AMG with ease, suggesting those numbers don't actually tell the entire story. It was only a 0.8 seconds difference at the end, but the visually, the result seemed a lot further apart than that.

With Audi and Mercedes fans being some of the easiest ones to offend, the guys at cars.co.za decided to give the Affalterbach machine a chance to redeem itself by racing the Ingolstadt monster around a track. Surely its lighter nature and shorter length (combined with a longer wheelbase) should give it the advantage, right?

Well, if there's one thing we've learned so far, is never to bet against an RS3. Audi really nailed it with this model, and even though any RS model is praise-worthy, there's definitely something about the smallest of them that justifies the crush the two hosts have on it.

Yes, it's mostly down to the engine and the sound that comes out of that five-cylinder unit and the exhaust system, yet neglecting the rest of the package would be a mistake. The car looks great and handles really well. In fact, it's only when you compare it to a BMW M2 that it starts to pale in this aspect.

Or you could compare it to a Mercedes-AMG A45 4MATIC. Unlike the Bimmer, the AMG also has an all-wheel-drive system, making it a closer match to the RS. However, as Ashley Oldfield - today's expert driver - was soon to find out, the two behave completely differently out on the track.

The Mercedes feels more poised, has a firmer suspension and isn't as prone to understeer. It also doesn't roll as much in the corners as a result, meaning it's more beginner-friendly than the Audi. Will that be enough, though, to even the scores at one all after the lost drag race? Well, there's only one way to find out. 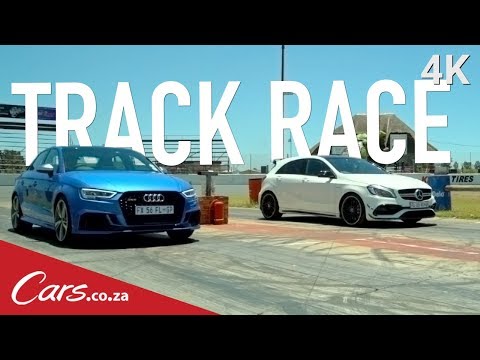