Just in case you missed our coverage here, we’re a bit Grand Theft Auto freaks ourselves... And we’re also deeply enamored with GM’s mid-engine take on the eighth generation of “America’s sports car.” So, is anyone surprised that when the two met up in real life, we jumped at the chance of sharing that with you?
38 photos

Anyone who’s vaguely familiar with any installment from the GTA series is probably well aware that one of this video game's main attractions comes from the cinematic-style depiction of certain cut scenes. They usually feature stunning cars, exotic backgrounds, and beautiful ladies. It’s something that’s rather unique in its design, and even when showcased in a real-life setting, it immediately triggers a complete recognition effect.

Of course, this video (embedded below) coming from the SchwaaFilms YouTube channel gives up a massive hint as it’s titled “Vice City Vette,” with Vice City being the alternate name for Miami and the third locale available to the player (as well as the lead on a number of installments).

Naturally, this real-life GTA also takes place in Miami and has a gorgeous ride as well as its fair share of skin flashing. This triggers our NSFW disclaimer, but come on—it's Miami, there’s a lot of heat, and the beach is always nearby... Fortunately, there’s no shooting and no accidents involving the C8 Corvette or any other traffic participants.

That’s one divergence from the storyline we’re more than willing to accept. As for the customized ‘Vette, we’re dealing here with an unknown number of modifications that include the stealthy all-black attire, a neat set of Vossen alloys, and what appears to be a High Wing Spoiler dipped in visible carbon fiber (we think it’s from Racing Sport Concepts).

Probably the best part is that we’re dealing with just the first part of a small series prepared by the owner and filmmaker, as the video description hints at an upcoming second part that will feature the C8 Chevy Corvette in a night-time action setting. 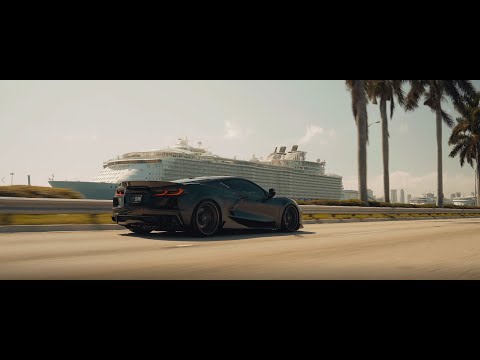